He was the only person with this name.

His first name, and his last name. He was unique.

He was Yoichi Sugiyama.

Yoichi was a manager for Fuji Bank and had been in the US for 1 1/2 years.

This was the second time he had been in the United States. He was at work on the morning of September 11. Fuji Bank was located on the 80th floor of the World Trade Center.

He was only 34 years old, married to Harumi, with 2 children, Tachi and Rikito.

This is how his family viewed the killing of Osama Bin Laden: I don't know what to say. I'm so surprised, Mari Sumiyama.

To mark the passing of his 34

To mark the passing of his 34-year-old son, Yoichi Sugiyama, his father Kazusada put his traditional-style short poems together in a collection published as ``Odes to the Soul of Ground Zero."

``Feelings inside me started popping up. I began searching for words in my head, he said in an interview with The Associated Press before leaving for New York to attend the second anniversary of the Sept 11 attacks.

`I want the families of the other victims to read it. Sumiyama's son was among the 24 Japanese killed in the attacks. He had been working for the New York branch of Fuji Bank, which had 700 employees in the World Trade Center.

Six Americans working for the bank died, along with Yoichi and 11 other Japanese.

Sumiyama, who at 66 recently retired from a patent research firm said he had not intended to publish his poems at first.

But he decided to self-publish 1, 500 copies, at a cost of 1.5 million yen (US$13 000) because he wanted to share his feelings with other victims families and to remind his countrymen that the attacks were not merely something that happened far away across the ocean.

``I wanted the Japanese to see this not in the third person, he said.

In one, he deals with the surreal feeling of watching the live, televised images of the twin towers on fire and then, four days later being there visiting New York hospitals in search of his son.

``Trees lit up with sunshine. Flags now at half-mast and the seasonal wind blows tender.

Why is the City of Sorrow so beautiful today?

He said the attacks have shattered his faith in peace. In the opening chapter he wrote, ``My son was lost Forever at the Twin Towers, although fervent has been my wish for a serene world
Without war and without weapons.
Even so another poem relates that, in the aftermath of the attacks there has also been joy.

Yoichi's wife, Harumi, was three months pregnant with their third child at the time of the attacks. She gave birth to a baby boy on March 11 the first day of a month long tribute in which twin columns of light were beamed into the night sky from a spot near ground zero.

``A new life was born
So quietly this evening
To succeed a life in a link.
Now the Towers of Light!
Keep growing taller eternally.
Half of the book is in Japanese, the other is an English translation, part of which Kazusada Sugiyama did himself. The poems are mainly a mixture of haiku and the longer tanka style of Japanese poetry.
It is a lovely book and a lasting memory in respect of Yoichi.

I am from Reunion Island and a visitor of this website. even though I never knew Yoichi I wanted to express to the family how sorry I am over the loss of your loved one. 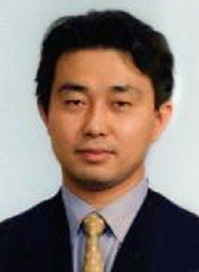