William on his wedding day

William and his family 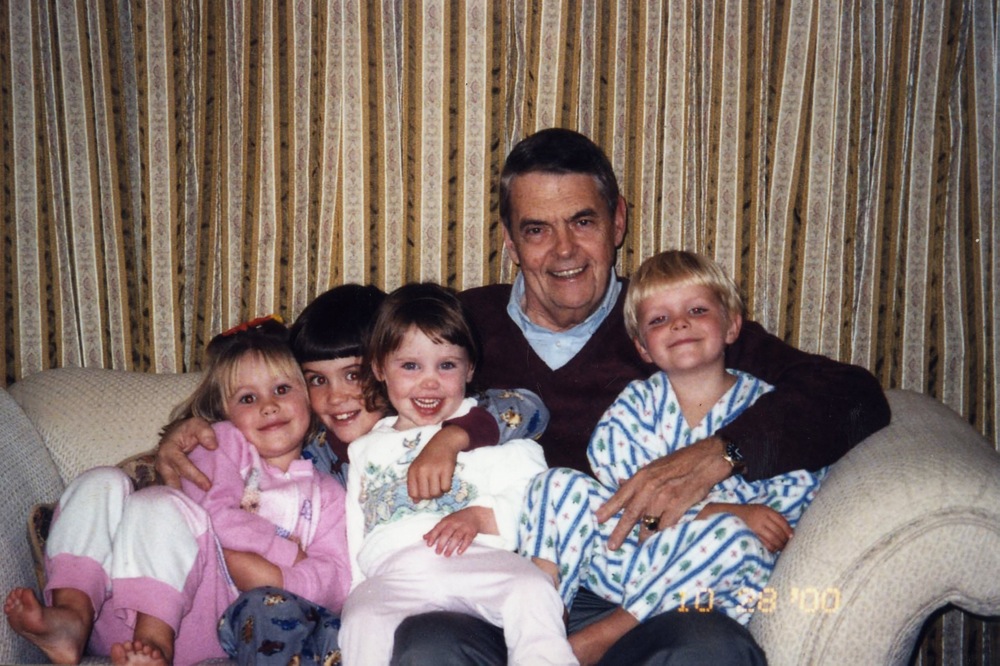 William with some of his grandchildren 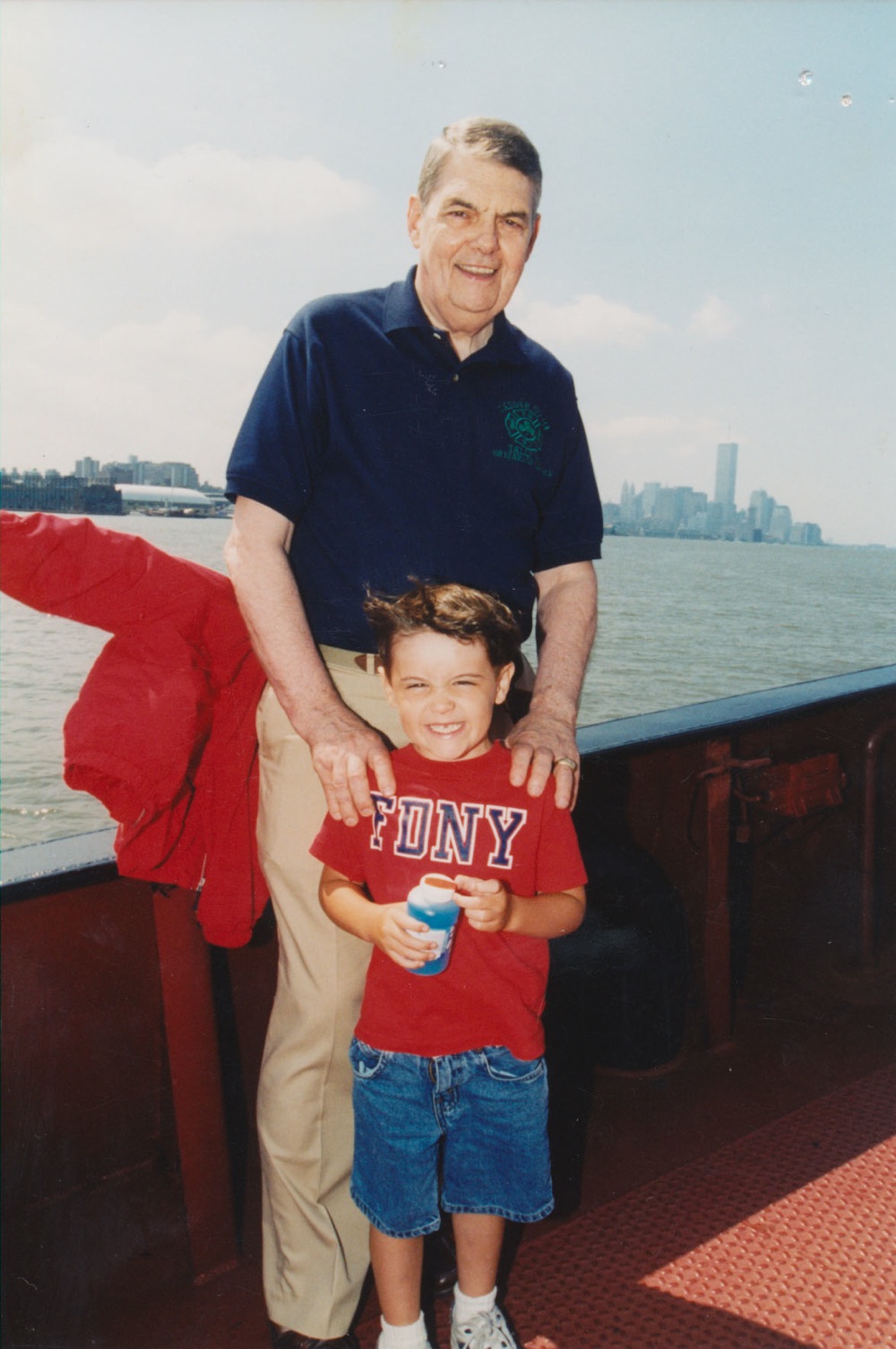 William with one of his grandsons 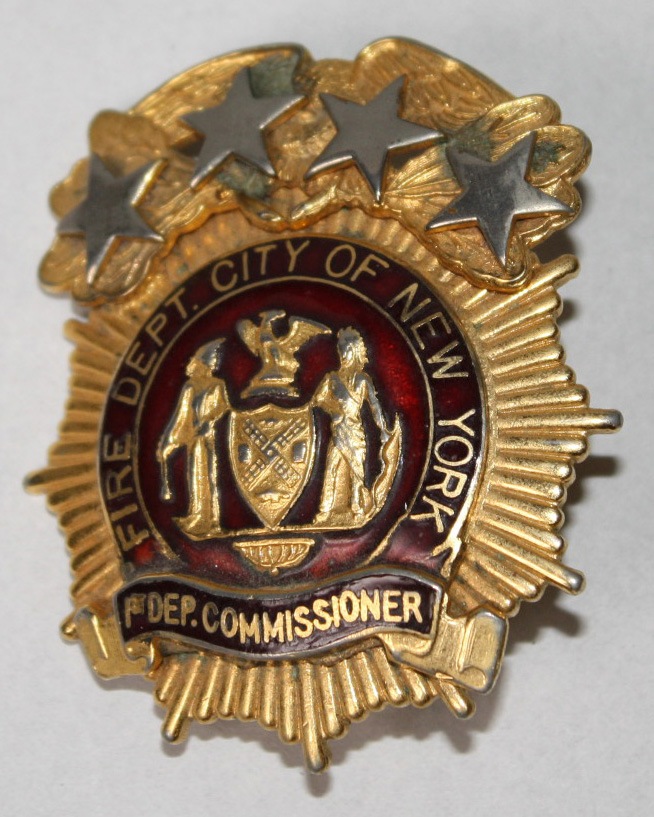 William on the job at a fire 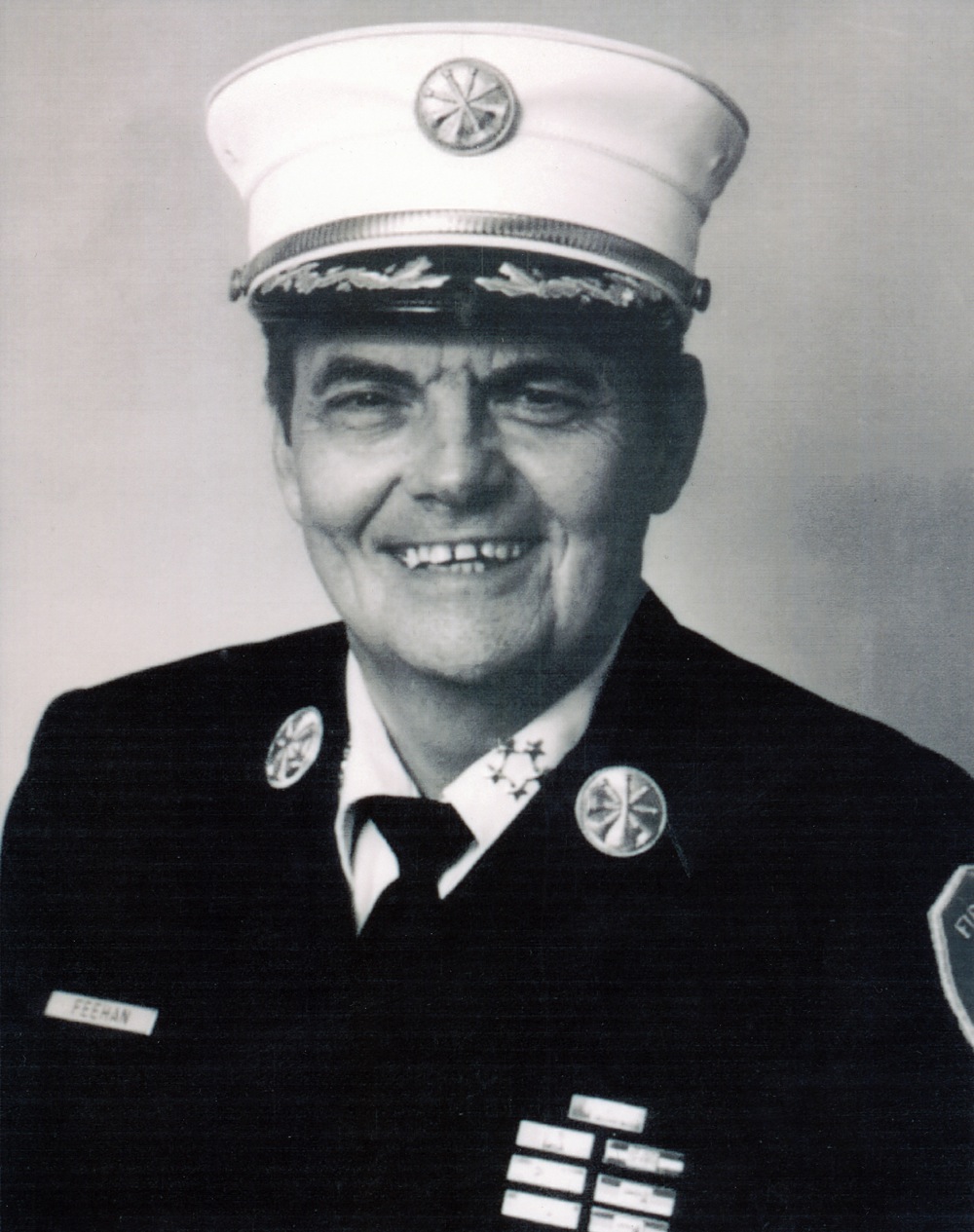 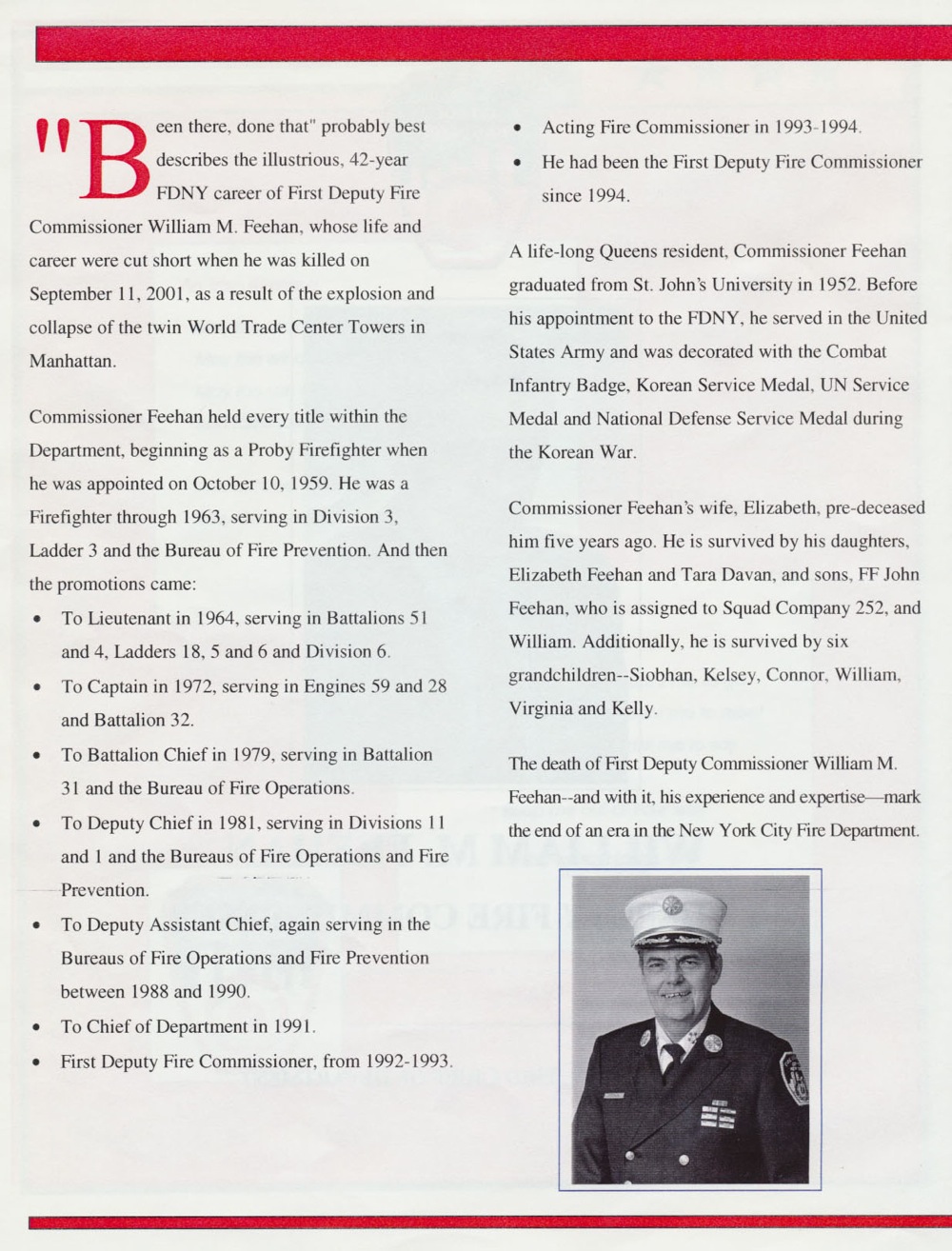 Biography of William Feehan which describes his 42 year career in FDNY. 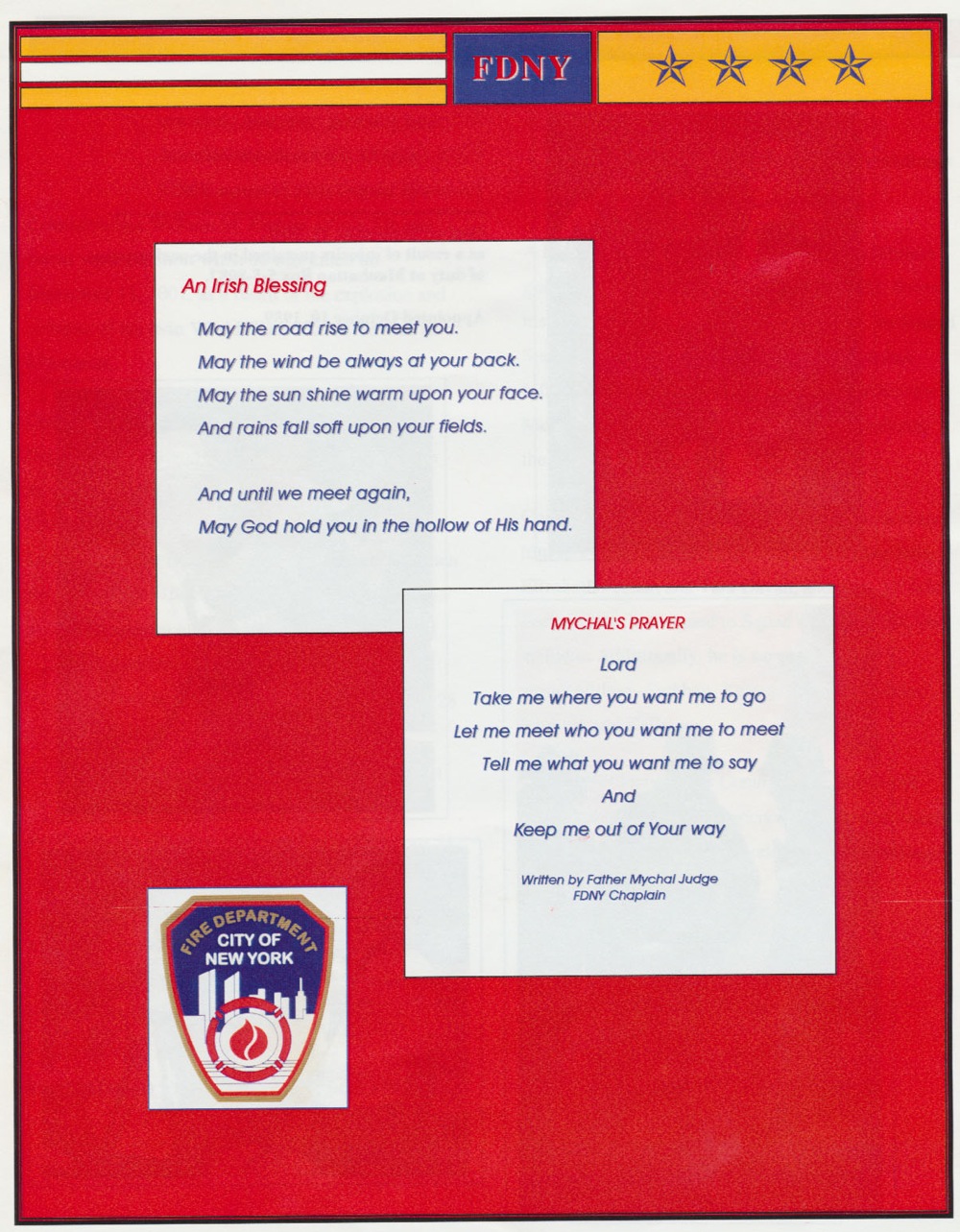 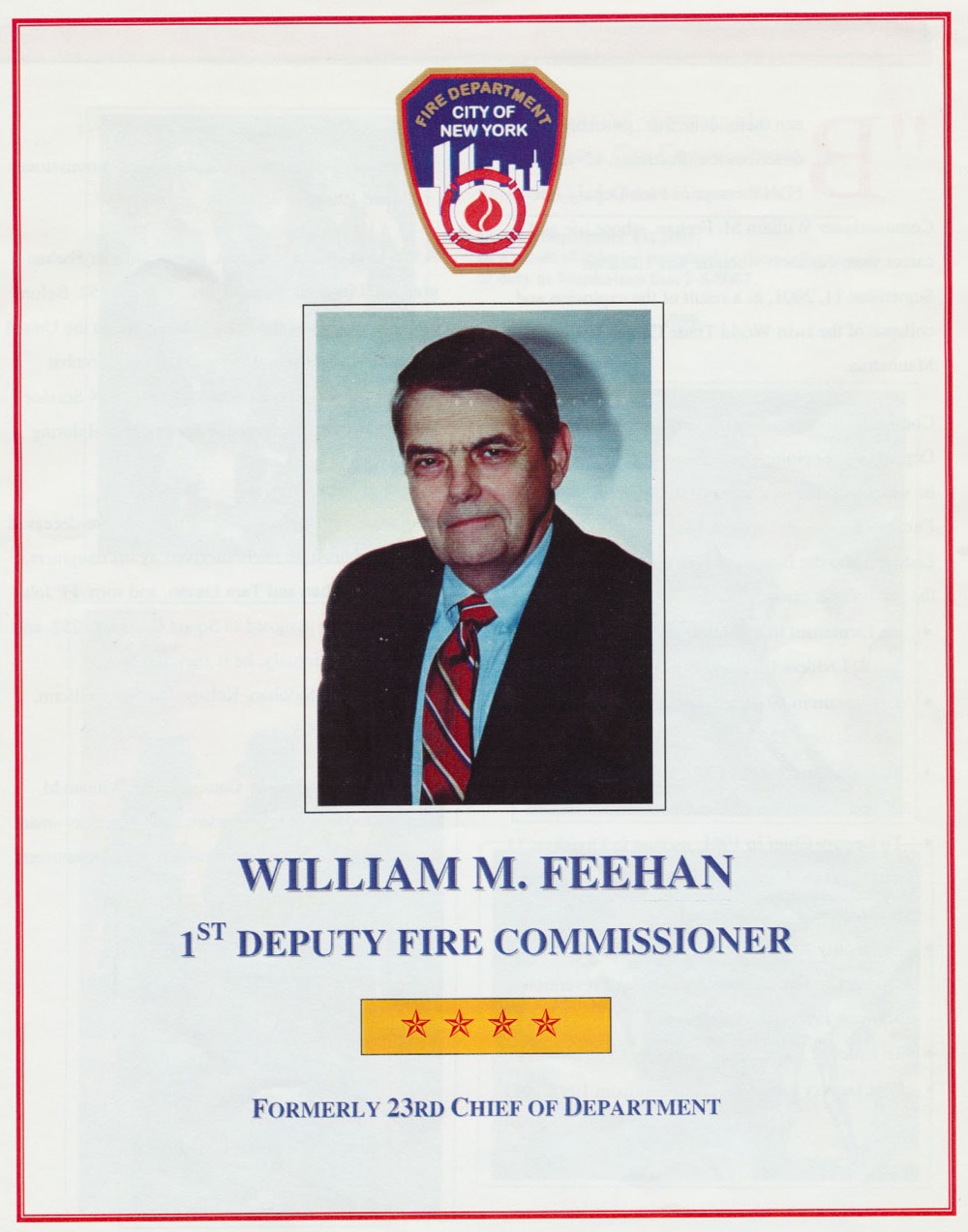 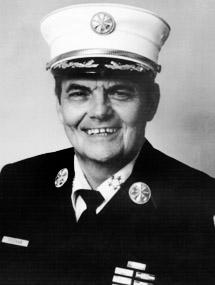 William Feehan, the Fire Department's second-highest official, whose knowledge and cunning in battling fires himself made him the stuff of legend to his firefighters, died Tuesday when the south tower of the World Trade Center collapsed on his command station.

He was 71 and lived in Flushing, Queens.

Mr. Feehan, the first deputy fire commissioner, was a former firefighter who rose through the ranks and who insisted on being called just chief, even after serving as the department's acting commissioner in the last months of the administration of Mayor David N. Dinkins.

Though someone of Mr. Feehan's rank would ordinarily have been asked to make way for appointees of the new administration after Mr. Dinkins's defeat, David Billig, a department spokesman, said no one dreamed of asking Mr. Feehan, who was thought to know the location of every fire hydrant in the city, to leave.

"He's the Fire Department," Mr. Billig said. "He is so knowledgeable."

Mr. Feehan's son John, also a firefighter, said that after a generation's service, his father could have made almost as much money collecting a pension as he did risking his life. "Retiring never even entered his mind," John Feehan said."

William Feehan, the son of a firefighter, was born in Long Island City, Queens, on Sept. 29, 1929. He grew up in another Queens neighborhood, Jackson Heights. He graduated from St. John's University in 1952 and then joined the Army and served in Korea.

He worked as a substitute teacher for several years, even after joining the Fire Department in 1959. He was first assigned to Ladder Company 3, and then to Ladder Companies 18 and 6, making him a truckie, as firefighters call those who serve in ladder companies.

He also served in Engine Company 59, and in Rescue Company 1, a unit that suffered heavy casualties in the World Trade Center collapse.

He fought many large fires, particularly in Harlem and Brooklyn in the 1960's. He battled the blaze that killed 12 firefighters in Madison Square in 1966, and the Brooklyn Navy Yard fire in 1960, which killed 50 people.

In an interview with The Daily News, he said of the Navy Yard fire: "It was the largest number of body bags I had ever seen. I was in Korea and never saw that many." In that fire, aboard the aircraft carrier Constellation, which was under construction, 50 workers were killed and more than 350 were injured.

When he was named chief of department in 1991, making him the first person to hold every possible rank within the department, he brought his firsthand experience to fires throughout the city.

In a speech to firefighters at a firehouse in Astoria that was celebrating its 100th anniversary, he spoke of the department's journey from the days of horse-drawn pumpers to times when firefighters are trained in cardiac care and other emergency medical procedures.

"We are only passing through," he said. "We are the guardians and custodians of a 100-year tradition."

Mr. Feehan was a trim 6 feet 2 inches tall. He was an avid reader of military history, among other subjects. He never replaced his rotary phone with a touch-tone set.

In addition to his son John, who lives in College Point, Queens, he is survived by another son, William, of Princeton Junction, N.J.; two daughters, Elizabeth Feehan of Brooklyn, and Tara Davan of Belle Harbor, Queens; and six grandchildren.

John Feehan said yesterday: "If there's any consolation to come out of this, it is that he didn't know he lost 200 of his men. He didn't have to deal with that horrific fact."

Editorial Obituary published in THE NEW YORK TIMES on September 13, 2001.

When he was not fighting fires, William Feehan walked the fields of Gettysburg, toured Churchill's War Room and read naval history. Military culture, with its embrace of tradition and tactics, appealed to Mr. Feehan much the way firefighting did, said his son, William Feehan Jr.

He remembered his father tracing the path of Pickett's Charge, mapped in his mind by accounts he had read in a novel, "The Killer Angels." The senior William Feehan, a New York City firefighter who ascended through the ranks to serve as first deputy fire commissioner, recommended the book often.

One who read it at his suggestion, Firefighter Vincent Panaro, was there when the towers fell and Commissioner Feehan was killed. At his wake, two days later, Firefighter Panaro stood sentry in his dress blues at his mentor's coffin. "He refused to leave until he was relieved," the younger Mr. Feehan said.

It was that sort of bond, that sort of Semper Fi can-doism, that Commissioner Feehan thought was intrinsic to the firefighter ranks, his family said. It explained, he thought, how people, whether they be soldiers or firefighters, found it within themselves to charge into harm's way to save complete strangers.

When he died, Commissioner Feehan, 71, was the oldest and highest-ranking firefighter ever to die in the line of duty.