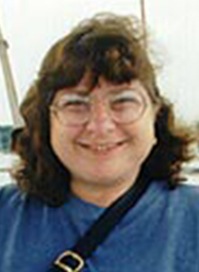 Vicki Yancey was on her way to Reno for a business conference but hadn't planned to be on Flight 77, which crashed into the Pentagon on Tuesday. Yancey, a former naval electronics technician, worked for a defense contracting company and had planned to leave Washington earlier, but ticketing problems delayed her departure, her husband, David, told the Washington Post. She called her husband 10 minutes before the flight boarded, to tell him that she got a seat on the plane. Profile courtesy of THE CHICAGO TRIBUNE. Vicki Yancey, 43, mom who loved politics Vicki Costanzo Yancey loved politics; it says so on her Web site. And she loved her family, figure skating, her four cats and making a difference. Mrs. Yancey, 43, who grew up in New Jersey, was a typical middle-class mother of two, according to her husband, David -- but a mom who testified before the Senate Finance Committee, who once gave CNN's "Quote of the Day" and who was involved in activities from her daughters' schools to national politics. An electronics technician and Navy veteran who lived in Springfield, Va., she died on Sept. 11 when American Airlines Flight 77 crashed into the Pentagon. "I think she was the epitome of a middle-class woman who loved her kids, loved politics and loved life," David Yancey said. "She cared for all human beings." Mrs. Yancey's life took her from New Jersey to Hawaii -- where she met and married her husband -- to Capitol Hill. Her Senate appearance, which she called on her Web site "the most interesting thing I have ever done," came in 1991 after she wrote to the Washington Post lamenting the loss of the one-income family. She was asked to speak at a tax reform hearing about the struggles of the middle-class family. She delivered the CNN "Quote of the Day," led the Headline News, and was profiled by CNN and PBS. Her quote: "Diving deeply into debt in our middle age is a very unappealing possibility." "She referred to that as her 15 minutes of fame," her husband said. She created her own Web site after that, filling it with photos and commentary on her many passions: daughters Michelle, 18, and Carolyn, 15; figure skating, which she loved to watch; travel, and politics. "She was a good American citizen," said her father, Salvatore Costanzo of Hamilton Township. Born in Kearny, Mrs. Yancey lived there until age 15, when her family moved to Hillsborough. She graduated from Hillsborough High School in 1974. At 22, she joined the Navy, becoming an electronics technician. She served for six years, four at Pearl Harbor. She and her husband married in Honolulu, where their first daughter was born. At the time of her death, Mrs. Yancey worked as a Department of Defense contractor with Vrendenburg Co. in Washington, D.C. She was en route to a conference in Reno, Nev. She was supposed to take an earlier flight but had to switch because of ticketing problems. "It breaks my heart that she left before any of us got up. We said our goodbyes the night before," her husband said. Their last conversation was before takeoff, when they said "I love you," and he wished her a safe trip. One thing David Yancey said his wife would not want now is for her death to cause any abuse to Arab-Americans. "That's not how she lived her life and that's not what she wants," he said. In addition to her husband, daughters and father, Mrs. Yancey is survived by a sister, Gloria Snekszer of Acworth, Ga.; three brothers, Ronald of Edison, Raymond and Richard, both of North Carolina; and several nieces and nephews. Memorial services with military honors were held at St. Bernadette's Catholic Church in Springfield. Memorial contributions may be made to the Pentagon Relief Fund. Profile by Jeanette Rundquist published in THE STAR-LEDGER.