I am so deeply sorry for your

I am so deeply sorry for your loss. I just wanted to take a moment to send my thoughts and prayers to Michael and his loved ones. I will never forget....

I will be thinking of you and

I will be thinking of you and your family this Sept 11. I chose you name at random in 2002 at the Rolling Requiem held in Boulder Co. I will wear the ribbon with your name on Sept 11. All my best to your family.

My husband and I know this

My husband and I know this extraordinary man's father, Morty. Morty is a wonderful person with an incredible attitude. No doubt his son inherited this from him. A tragic loss and we must NEVER forget the people who lost their lives.

Posted by Joann and Robert Parker

Dear Family, thinking of you

Dear Family, thinking of you again this year. May find peace in your wonderful memories of your son Michael. All the best Maureen Arthur.

Thinking of you and your

Thinking of you and your family today
All the best 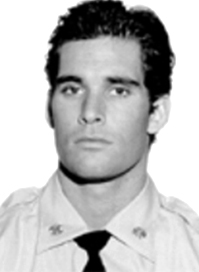 Michael Weinberg was relaxing on vacation, just a few minutes from tee time, when he got news the World Trade Center - where his sister worked - had been hit by an airliner. Weinberg sped toward the city, both worried about his sister on the 72nd floor and called to duty professionally. Weinberg, 34, was a New York City firefighter. "He always did the right thing," said his father, Morty. "He was there to be helpful." Weinberg, from Maspeth in Queens, drove to the station house, then went to the Twin Towers with Fire Department chaplain Rev. Mychal Judge and Capt. Daniel Brethel, his father said. As the towers collapsed, Weinberg and Brethel tried to find shelter under a firetruck. Weinberg's family was told he died instantly.

His sister, Patricia Gambino, escaped before the building's collapse. Weinberg was a talented athlete who attended St. John's University on a baseball scholarship and played minor league baseball with Detroit Tigers farm teams in Niagara Falls and Fayetteville, N.C. He was a lifeguard, personal trainer and gifted golfer who considered someday joining the senior pro tour, his father said. Still, he loved being a firefighter, his father said. "He liked the action, the camaraderie. He liked everything about it." Many of the young men Weinberg grew up with in the neighborhood joined the department too. Many are now missing. "There's so many guys like him who lost their lives," his father said, adding he was lucky enough to get his son's body back. "It's unbelievable. I can't get over it. I never will."

Profile courtesy of THE CHICAGO TRIBUNE.