To the family of Michael E.

To the family of Michael E. Roberts,

My name is Bo Mason and I am a fire medic on the eastern shore of Virginia. Last year I traveled to Richmond to participate in the annual 911 memorial stair climb. At that climb we are all issued a badge with the photo, name, and basic info of the firefighter we were to honor and I drew Michael's. We climbed 110 stories and when we finished, we rang a brass bell calling out the names of our fallen brothers. I can tell you as both a former soldier and now as a fireman that the bonds forged in our profession are deep and lasting. I am sure that all of his surviving brothers in New York will carry his memory with them for the rest of their days, as for me, I am attending the climb again next month and will with pride call his name once more. 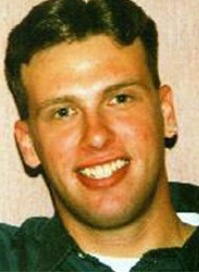 Michael Edward Roberts, of Pearl River, Age 30. When Michael Edward Roberts was a third-grader at St. Margaret's School in Pearl River, he finished a classroom assignment saying what he wanted his future to be by writing: "I want to be a Fireman like my father and to help save people's lives." The young boy saw his wish become a reality when he joined the New York City Fire Department 3-1/2 years ago, following in the footsteps of his father, retired New York City Fire Department Capt. Thomas Roberts.

On September 11th, Firefighter Michael Roberts helped save the lives of more than 25,000 people in the terrorist attack on the World Trade Center. A Memorial Mass will be held this coming Monday, November 12th at the Chapel of the Most Holy Rosary, St. Dominic's Convent, 496 Western Highway in Blauvelt at 11:00 AM to celebrate the life and memory of Michael Roberts. Michael was born three days before Christmas in 1970 in Staten Island to Thomas and Paulette Roberts. Shortly after his birth, the family moved to Pearl River, where the young Firefighter-to-be went to St. Margaret's School and Albertus Magnus High School. He served as an altar boy at St. Aedan's Church and loved to play sports. From the time he was in the third grade, the ideal of serving others as a Firefighter was uppermost in Michael Roberts's mind.

After graduating from Albertus Magnus and the State University of New York with a Bachelor's Degree in Psychology, he realized his dream of becoming a Firefighter in February of 1998. During his probationary year,he served with Ladder 35 in Manhattan, Engine 224 in Brooklyn and Engine 43 on Sedgwick Avenue in the Bronx and then back to Ladder 35 since October of 2000. His father and mother remember the pride they felt when their son graduated from the Fire Academy and the earnestness with which the young Firefighter looked forward to his first fire. "I remember him going over his gear and telling me that he just wanted to get the first fire under his belt," his Dad said. Firefighter Michael Roberts need not have worried: he did well, and was a popular and well-liked member in whatever house he served. He was humble about his service and about his achievements, with an autographed picture of himself, Mayor Guiliani, Commissioner Von Essen and Chief Peter Ganci not on a wall, but safe among those items he treasured, including a picture of himself with a firefighting bear bought for him for Christmas by his Mother.

Early on the morning of September 11th, his parents were on their way down South, while his brother and he spent the early morning getting ready to go to their jobs in Manhattan. His brother Kenny reported for work at 7 World Trade Center while Michael reported to work at Ladder 35. The two brothers bantered to each other and said their goodbyes as each headed off to Manhattan. At 9:08 in the morning, Fire Department units began to be dispatched to the World Trade Center. Michael Roberts called his brother, concerned for his safety. Kenny Roberts - by that time, leaving the World Trade Center - didn't hear his brother's call until later that afternoon while retrieving messages. "When I was leaving the World Trade Center, thousands of people were with me, rushing to get out. There was only a small group of people going in - New York City Firefighters, Police Officers and EMS," Kenny Roberts said. Among those New York City Firefighters was Michael Roberts, whose Ladder 35 followed Engine 40 into the World Trade Center at 9:14 that morning. It is believed that the Firefighters of Ladder 35 went to the South Tower, the second one hit, but the first to collapse. Firefighter Michael Roberts's efforts helped save the lives of thousands of people until his own life was taken, with those of his comrades, in the collapse of the South Tower.

Michael is survived by his father, Thomas Roberts; his mother, Paulette; his sister, Lisa Roberts of Manhattan and brother Kenneth Roberts of Pearl River; together with his maternal grandmother, Rita Socquet of Connecticut and his girlfriend, Teresa Ivey of New City. Active in community affairs, Michael Roberts was a parishioner of St. Aedan's Church, a member of the Rockland County Dartist Association and the Basketball and Softball Teams of the New York City Fire Department. His family notes that he will be remembered for his "kind and caring manner and wonderful smile that lit up a room, his devotion to his family and friends, and his tremendous joy in his work as a Firefighter assigned to Ladder 35 in Manhattan."

When Michael Edward Roberts was just 4, his father took him to a firehouse and sat him on a rig parked there. That's all it took. From that moment on, life was a countdown to the Fire Academy. He took time to get a degree in psychology from the State University of New York at Buffalo, but "he knew without a doubt what he was going to do," said his father, Thomas Roberts, a retired New York City fire captain. "He'd say the only decision he needed to make was whether to grow up, or become a firefighter."

Finally, in February 1998, Michael Edward Roberts was formally admitted to the academy. He ended up at Ladder Company 35 near Lincoln Center. "He was so happy," said his sister, Lisa.

Firefighter Roberts continued to live in Pearl River, N.Y., where he grew up and where he mastered tournament darts for a local team. In the firehouse he listened to other people so intently that he came to be known as "the psychologist."

At his memorial service in November, Firefighter Roberts's family finally met the family of another Michael Edward Roberts, a firefighter with Engine Company 214 in Brooklyn. They exchanged greetings and politely commiserated about the confusion caused by their identical names and backgrounds, both 31, both sons of firefighters.

Then the families brought together by grief went their separate ways, one to Breezy Point, one to Pearl River. And Captain Roberts brought back his son's badge and put it in a frame in the living room.