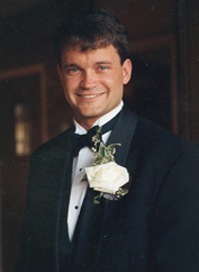 Kevin James Hannaford simply couldn't wait to try and impart his zest for life on his son, Patrick James. Always the first guy on the slopes in the morning, Mr. Hannaford bought the boy his first pair of skis when he was just 18 months old. Friends and family say it was typical of a father who relished nothing more than watching his Patrick, now 2, take his first steps or first awkward slide down a snowy hill. On the morning of Sept. 11, Mr. Hannaford woke before dawn to leave for his job as a commodities broker for Cantor Fitzgerald on the 105th floor of the World Trade Center. His wife, Eileen, who is expecting the couple's second child in January, said she usually simply rolled over in the dark, but that morning got up to hug him good-bye. "We hugged each other and told each other how much we loved each other, he touched the baby and said 'I love you, baby,'" she said. "I'm so grateful I got up and hugged him." The 32-year-old Mr. Hannaford has not been seen since. Born in Brooklyn, Mr. Hannaford lived in Walnut Creek, Calif., before his family returned to the East Coast and settled in Basking Ridge. He and Eileen, acquaintances at Marist College, began dating while they both lived in Hoboken in the early '90s. They married on April 4, 1997, and moved to Basking Ridge two years later. Mr. Hannaford carried a love of sports throughout his life, from his days on Basking Ridge's undefeated state Group 2 championship soccer team, to summers working as a lifeguard on Long Beach Island, to his weekly games with the Montvale Men's Soccer League. The Rev. Michael Ward met Mr. Hannaford while living in Hoboken. Ward was working as an administrative assistant for Merril Lynch but was contemplating entering the seminary. "He thought it was cool," said Ward, who now ministers at St. Cecilia's Church in Kearny. "He was very supportive." Ward added Mr. Hannaford "truly loved life and he always put family first." Mr. Hannaford also is survived by his parents, James and Nancy Hannaford of Basking Ridge; his sister, Elizabeth Saraceno, and his brother, Patrick Hannaford of Morristown.