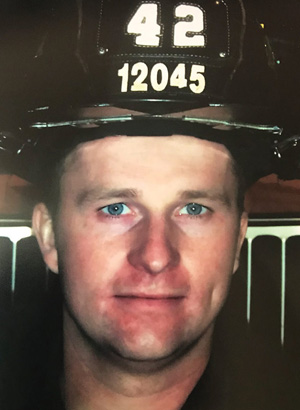 Kevin “Calvin” Rooney passed away on January 22, 2017. He was the dear son of Kathleen (O’Driscoll) and Francis Rooney, the adored husband of Vaneza (Paulino), the cherished father of Jasmin, dear brother of Frank, loving uncle of Ava and Violet, and a loyal friend to many.

Kevin served as a member of the NYPD from 2000-2004 with the 33rd precinct. While serving the City of New York as one of its Finest, he responded to the aftermath of the 9/11 terrorist attacks in NYC. Kevin went on to serve the FDNY with Engine 42. At the firehouse, he learned to fight fires, cook, and he met some of the bravest men to walk the face of the earth.

Born on Groundhog’s Day, Kevin was raised in the Bronx. He enjoyed basketball and the beach and had a passion for music. Most of all, he enjoyed spending time with his family and friends. He had a great sense of humor and always had a joke, some dryer than others, but he was always able to get you to laugh.

Always a strong person, Kevin fought his hardest but ultimately lost his battle to cancer on January 22, 2017.

Firefighter Kevin Rooney who served the New York Fire Department, passed away on Sunday, January 22, 2017, due to cancer directly related to serving at the World Trade Center following the terror attack on 9/11/01.

Firefighter Rooney previously served as a New York Police Department Officer for the 33rd Precinct from 2000 till 2004. On the day of the WTC terror attack, Firefighter Rooney responded as an NYPD Officer. It was during his response to the attack, working the scene, that he was exposed to toxic air that caused the cancer.

In 2004, Firefighter Rooney left the NYPD and became a full time Firefighter for NYFD, Company 42, in the Bronx. He was still active in his service.

Firefighter Rooney was diagnosed with cancer last year and fought valiantly. He is one of 124 heroes that have died due to 9/11 health-related issues.

Firefighter Rooney leaves behind his wife and his daughter. He will be greatly missed by his department, family, and all who knew him. His dedication to law enforcement and emergency services and service to his community will never be forgotten.