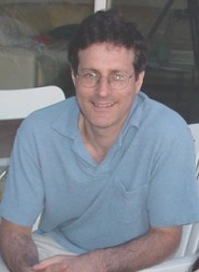 1957-2001 Josh grew up, safe and suburban, in Michigan. His was a sunny childhood. He had a natural talent for negotiating the big and the little exigencies of life. And he had a streak of the whimsical as well. He was much influenced by a family tradition of interest in public affairs. Majoring in political science and economics, he spent two summers as a congressional intern in Washington, D.C., and a year as an aide to a member of the British parliament. Josh received his A.B. from UM in 1979, spending his senior year in the Institute of Public Policy Studies, the forerunner to the Gerald R. Ford School of Public Policy. He then went to Princeton University, receiving a Master degree from the Woodrow Wilson School in 1981. He was the first recipient, for the State of Michigan, of the Harry S Truman Award. Josh's first job was as special assistant to the new president of the NY Mercantile Exchange. He then moved on to Amarada Hess, JP Morgan, the NY Metropolitan Museum of Art (as Associate Treasurer), Grantham, Mayo in Boston and back to NY. Continuing his work in the field of international finance, Josh was a senior vice president at Fiduciary Trust International. He was among the 2823 people killed on September 11, 2001 when terrorists flew planes into the World Trade Center Towers. Josh relished the worlds of economic and politics; he appreciated and sought to understand their connections. He found his work in international finance the most challenging and fascinating of all the work worlds he had experienced. He also understood the importance of giving to others. He served as the treasurer for the NY Food for Survival as well as on the University of Michigan Investment Advisory Committee. Josh was an avid reader, sailor, scuba diver and mountain hiker. More than anything, he had a gift for friendship and he treasured the many friends he had in his lifetime. The Rosenthal family, Josh's sister Helen, nieces Madeleine and Alexandra, his mother Marilynn and father Avram survive him. He was a brother who was also a best friend; he was an insightful and loving son; he was a devoted and fun-loving uncle. Josh's family and friends have established the Josh Rosenthal Education Fund at the Gerald R. Ford School of Public Policy to honor his memory and his interests. The Rosenthal Fund will support lectures, special seminars, student research, internships and other programs, encouraging new and deeper understandings of international issues.