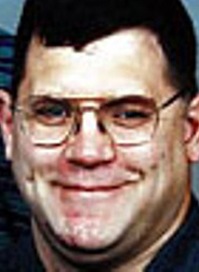 Joseph John Pycior Jr. was a Navy man through and through, the son, grandson and nephew of Navy veterans. He spent almost 20 years in the service, served on the aircraft carrier USS George Washington and was a veteran of Desert Storm. He also happened to really like playing with Legos. "He really was a big kid," said his widow, Terri Pycior. Mr. Pycior, a Carlstadt native, was working at the Pentagon on Sept. 11 when a hijacked plane crashed into the building. The aviation warfare systems operator first class, just months away from his Navy retirement, was killed. Mr. Pycior, 39, was looking forward to starting a new career as a middle school teacher, focusing on his favorite subject, history. The Civil War buff had completed correspondence courses at Thomas Edison State College in May and was supposed to collect his bachelor of arts degree in history during a ceremony in Trenton on Oct. 13. Instead, his wife and two sons, Joey III, 10, and Robbie, 8, came from their home in Landover, Md., and accepted the degree for him. From his youngest days, Mr. Pycior wanted to join the Navy, said his mother, Arlene Pycior. He was in the Navy Brigade as a boy and entered the Navy Junior ROTC at East Rutherford's Becton Regional High School, where he met Terri. A week after graduating from high school, Mr. Pycior enlisted in the Navy. He served in the Persian Gulf twice, on P-3 airplanes and in the recruiting field in Philadelphia. He began working at the Pentagon in 1999. "With any job he was given, he was very conscientious with his job," his mother said. "He was a good father, a good husband and a good son." Mr. Pycior also loved being Webelos den leader of his older son's Cub Scout pack and motivating the young boys, Terri Pycior said. "He was like the life of the party," she said. During Labor Day weekend, the couple went to the Cherry Hill area and talked with real estate agents about houses. They wanted to settle down, get a dog. They promised the boys it would be their last move. Mr. Pycior was looking for a house with a basement. He was going to make a special room with no carpeting, where he and sons could build huge models, made of Legos. Along with his mother, his wife and his two sons, Mr. Pycior is survived by his father, Joseph J. Pycior. He was predeceased by a brother, Gregory. Profile by Greg Saitz published in THE STAR-LEDGER.