John was my dear friend and

John was my dear friend and confidant. We met almost exactly 30 years prior to the day when fate took him from us all. Vassar College was fertile ground for the likes of us in 1971, at a time when sex and drugs and rock and roll reigned supreme. Two long haired skinny hippies with a youthful urge to learn...about life... love... and academia. Living in the same dorm for 2 years we became best friends and our ties held fast for three full decades. Both of us escaped the military draft during the Viet Nam war, but only by the skin of our teeth. We found consolation together in our mutual plight. John became one of the more recognizable figures on campus, with his shaggy mane and his even shaggier dog Deyor. With a Gauloise cigarette tucked firmly between his fingers, he drew much attention and seemed to set an aesthetic standard for an entire clique of Vassarites. He instilled in me a taste for fine French wine. We would sit out on the farm or golf course sipping a St. Emilion and swapping tales of female dalliances. As bartender at Frivolous Sal's (THE Vassar hangout) he could be relied on to supply potent potables gratis to all his VC buddies. Those were pretty special days for us.
He and I both shared a passion for working with our hands. I recall his fervent desire to become a farrier back in college. He also had comprehensive knowledge of auto mechanics. John was one of my only friends who truly understood me when I opened up a shop to restore British sports cars though he was absolutely terrified when I would pick him up in my Triumph and drive him around the city. After a ride, he would brew up a pot of the strongest tea imaginable to "calm his nerves". We would sit and drink while snacking on some of the best Hungarian pastries in New York, or Jewish deli treats from Murray's. Where food and drink were concerned, John had no time for second rate fare. This was indicative of his sense of refinement and worldly appreciation.
I witnessed the evolution of a bright, articulate man over the years. From student, to cab driver, to a major player in the world of finance, his energy was always focused. Though we chose different career paths, our friendship was cemented by common interests, including music, art, birds, travel, as well as the details of day to day living.
John's passion for his work was without limit. When he worked for Prudential Bache, he would call me nearly every day and keep me on the phone for an hour, though most of the time he put me on hold so that he could deal with his accounts.
When he moved to Cantor, his time was at a premium and communication between us during the day was mostly by email, but there was a ton of that coming from his desk. After 27 years of friendship this gave us the opportunity to communicate by writing, which opened up new levels of expression. His accounts of watching hawks from the roof of his apartment building were very florid, or he would go into great detail about a new opera CD he had just acquired. When I visited him at his apartment, after removing my shoes, giving his cats a loving scratch and settling in on his sofa, I might be subjected to a healthy dose of Wagner, followed by Mr. Tambourine Man by The Byrds, his favorite rock and roll group.
In recent years, John became an avid fan of European travel. He adored the French countryside and the beauty of Italy. A few weeks ago, my phone rang. It was John calling from Pienza, Italy. It was 11PM there and I could hear churchbells tolling the hour. John had called to share the experience with me. He wanted me to feel, see and hear the peace and beauty of the people and the place. I'll never forget his saying "It's only $1.35 a minute... Who Cares?!" He continued walking from church to church so I could hear the bells. He said he was in heaven. We will all miss him deeply. 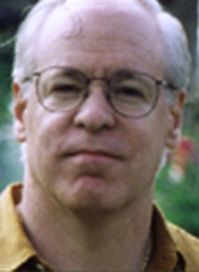