Portrait of John Hartz from the Fiduciary Trust.

What Was it All About? 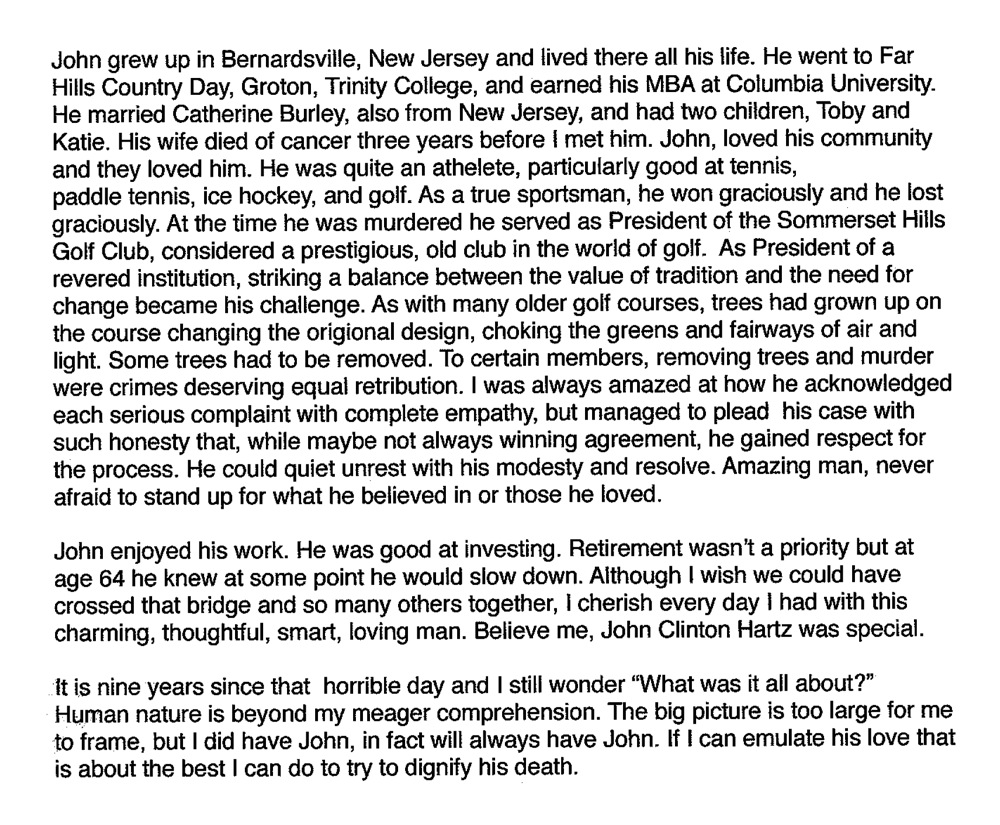 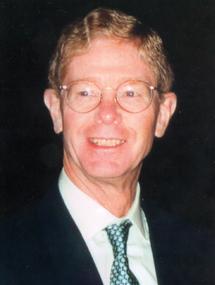 They were friends, neighbors, business associates and golfing partners.

In speaking of John Clinton Hartz, the words "best friend" came to mind for many, as did "pillar," "adviser" and "someone who would rise to the occasion in the face of adversity."

A crowd of more than 700 turned out for a memorial service at St. Bernards Episcopal Church yesterday to bid farewell to the 64-year-old Bernards Township man who, they said, meant so much to the Somerset Hills community.

"Honorable, that is the word for him," said his sister, Elizabeth H. Forster, a New York City resident.

Mr. Hartz, as senior vice president of Fiduciary Trust International, was at work on the 94th floor of Two World Trade Center when a hijacked jetliner slammed into his building.

Just as in 1993, when Mr. Hartz rounded up fellow workers following the bombing of the World Trade Center and led them to safety, his resolve during the Sept. 11 tragedy must have been the same.

"This time it took him to heaven," said his wife, Elinore.

He was so well thought of at Fiduciary Trust that two busloads of employees made their way to Bernardsville yesterday to pay their respects.

As a member of the Essex Hunt Club in Peapack-Gladstone and a lifelong member and current president of the Somerset Hills Country Club, Mr. Hartz's life was deeply rooted in the community.

"It's senseless," Todd said of the terrorist attack that took his friend. "We shouldn't have had to lose John in this way."

John von Stade, chairman of the Far Hills Race Meeting, was another good friend. "He was a good friend to all of us here," he said.

And while his life was spent in the realm of power and influence, there was an innocence to Mr. Hartz many considered to be profound.

In addition to his wife and sister, Mr. Hartz is survived by his children, John C. Jr. of Palm Beach, Fla., and Catherine B. Hartz of Boston; his stepchildren, Hadley F. Gates and David A. Pollet, both of Boston; two nieces, Laura Forster of Mill Valley, Calif., and Lisa Forster of New York City; and two nephews, Scott Hartz of San Francisco and Tim Forster of River Edge.

Profile by Eleanor Barrett published in THE STAR-LEDGER

As they do in so many households, the letters seeking charitable donations piled up. But John C. Hartz would not throw them away unopened. One by one he would go through them; carefully, thoughtfully, he would choose which charities he would send money.

"He was inclined to go through all the solicitations and would consider giving to them all," said his wife, Ellie Hartz. "Many times, he would send them something." The causes ranged from endangered species to local community services.

She and Mr. Hartz, 64, a senior vice president at Fiduciary Trust, started their romance with a blind date in January 2000. They married last November. The couple, who lived in Basking Ridge, N.J., hiked on nearby trails and biked along the Delaware River. "I was so much looking forward to the rest of our lives together," Mrs. Hartz said. "It was too short a time. We were basically just newlyweds. I couldn't think of growing old with anybody but him." For their honeymoon, the Hartzes took their grown children to Bermuda.