He was my mentor, my ardent supporter, and fellow man of faith. I miss him dearly--his contagious smile, his laughter, and his good grace. I ran with him, worked with him and think of him as vibrant as he was. He is in my heart and prayers always. Jerry, you are missed.

In Remembrance
A Son's Perspective 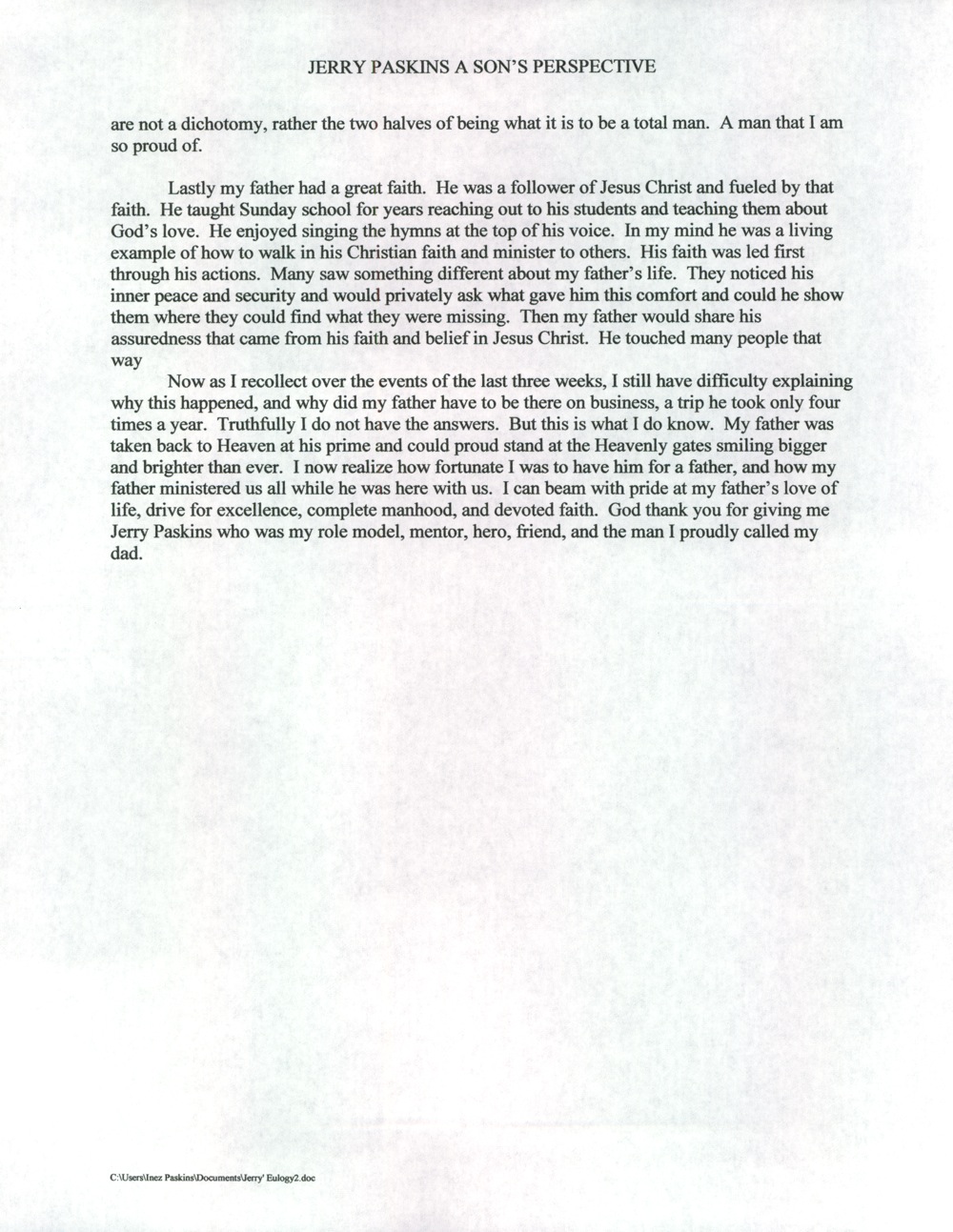 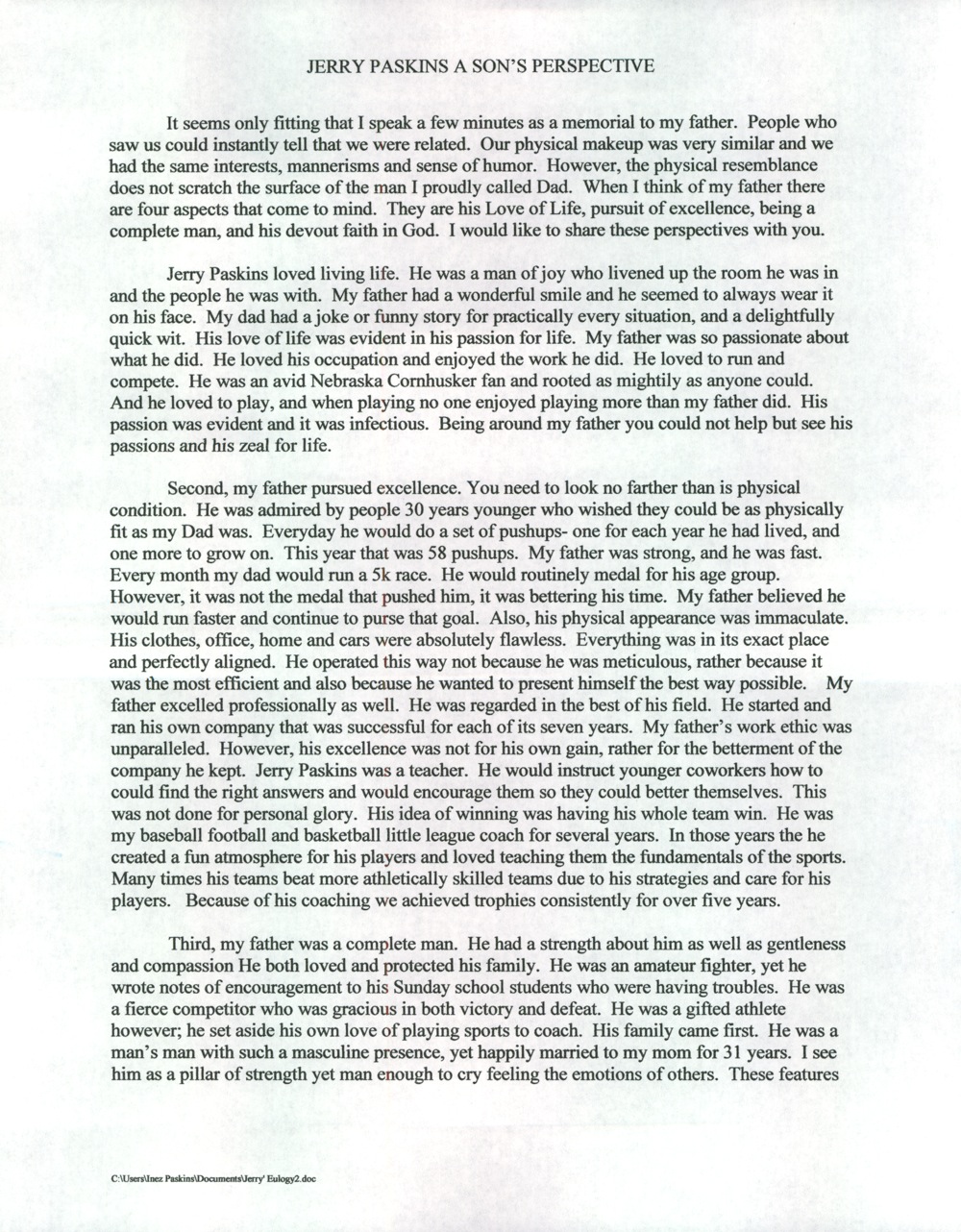 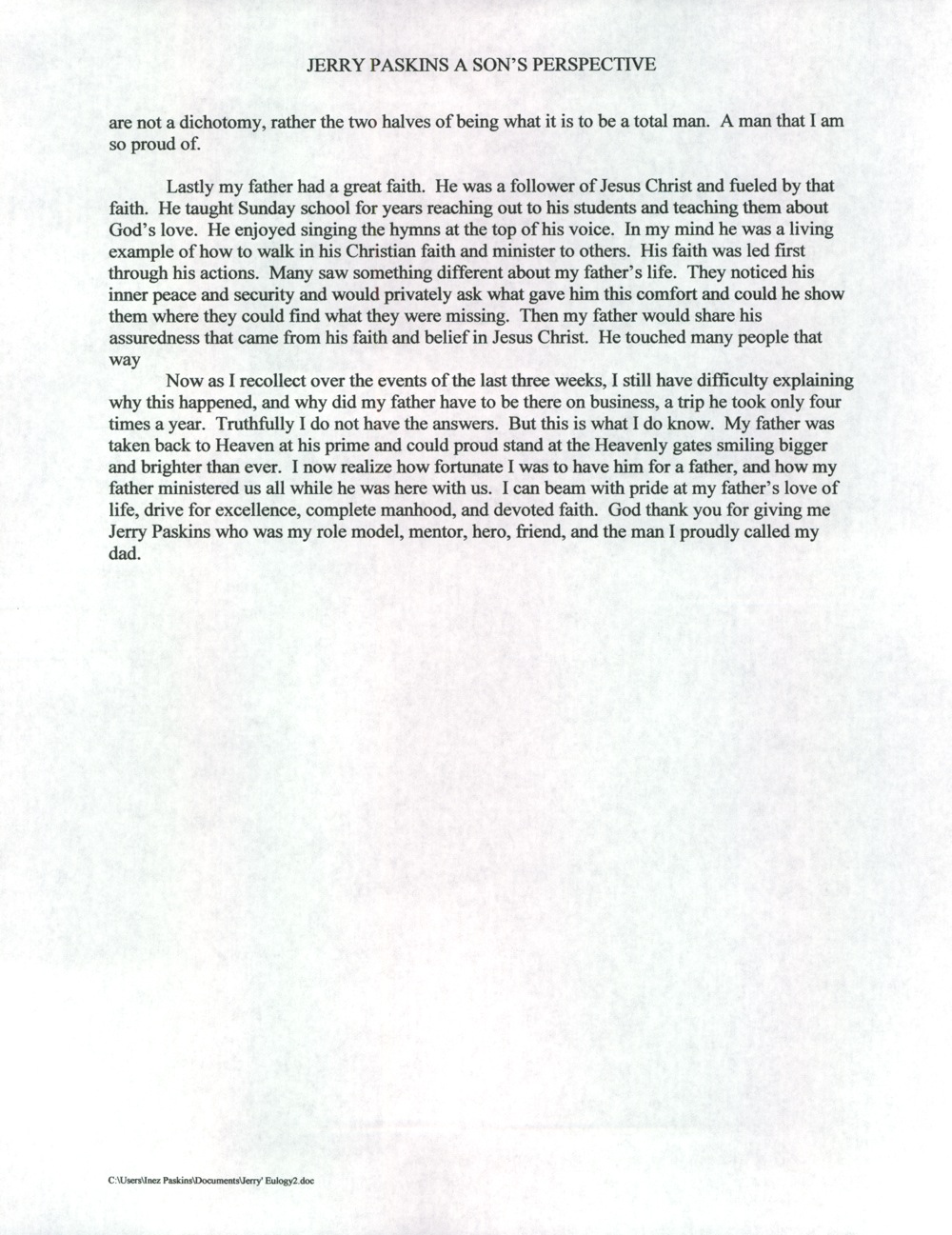 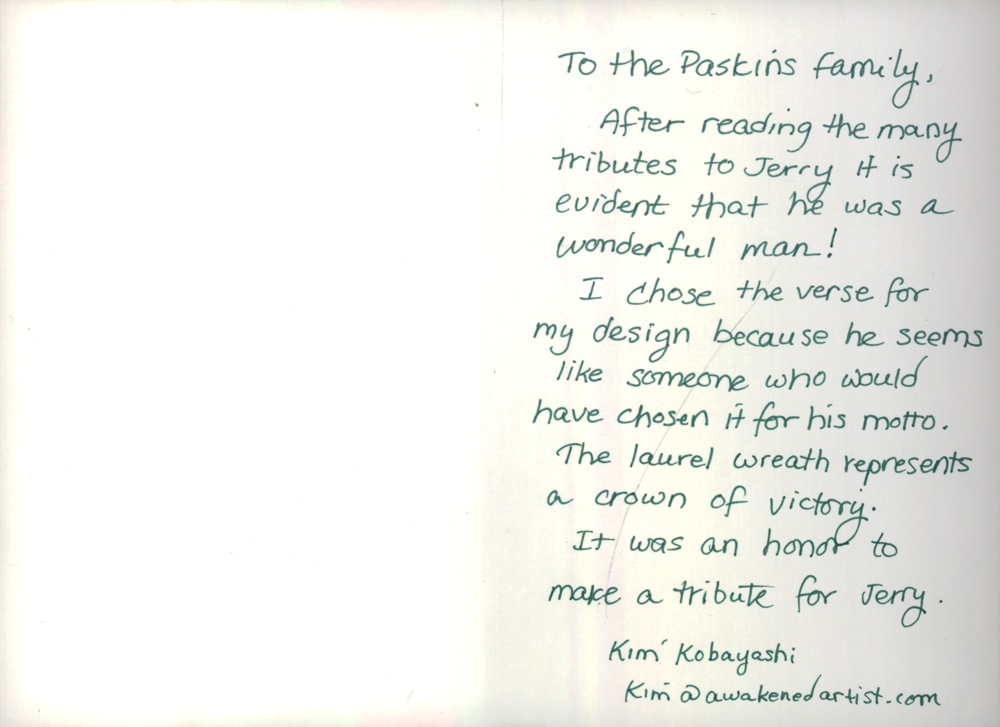 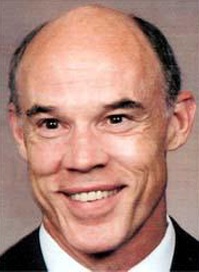 Jerrold H. Paskins, 57, was from Anaheim Hills, California. He worked for Devonshire Group, an insurance company, and was in New York City for an insurance audit on the 94th floor of the World Trade Center when the first plane hit on that floor. "It was a direct hit to the 94th floor," Inez Paskins (his wife) said, "it was instantaneous."

Jerrold and Inez Paskins were married for 31 years. They met as college students and have one son, Robert, who was 28 and living in San Francisco at the time of Mr. Paskin's death.

Mrs. Paskins described her husband as a man with a strong work ethic and a stickler for routines. He was at his office every morning by 6, he never stopped for lunch and every day he would do push ups - one for each year of his life and then one more for good luck.

Jerry, as his friends and family called him, never left the house without a ring that his wife had given him for his 40th birthday and a 1976 Bicentennial silver dollar. When his remains were identified exactly two months after the tragedy, the ring and coin were located and returned to his family. What a blessing for them to have these precious items back.

The one fact that I learned about Mr. Paskins that warmed my heart the most was that he was a man of faith, a strong Christian who was very active in his church. He taught Sunday school for 18 years! What a commitment of service to the Lord. All of the things that his friends, family and coworkers said about him conveyed his love for the Lord by how he carried himself in the world.

Words like compassionate, kind, patient, even-tempered, good natured, dependable, and athletic were used to describe this man. He was a runner so he could stay in shape and stay healthy for himself and his family. He coached youth football, basketball and baseball. Many people described his wonderful sense of humor and said he always had a joke or funny story to share.

UP TO 58 PUSHUPS
Jerrold Paskins

There were two things Jerrold Paskins never left home without: the ring his wife Inez gave him for his 40th birthday and a 1976 silver dollar issued for the nation's bicentennial.

Mr. Paskins, 57, a reinsurance executive with the Devonshire Group in Anaheim Hills, Calif., was a stickler for routines and mementos.

He was in the office every morning by 6, never stopped for lunch, and never let a day go by without doing pushups — one for every year of his life and "an extra for good luck."

"The work ethic was very important to him," said Inez Paskins, who met her husband of 31 years when they were college students. The couple had one son, Robert, who lives in San Francisco.

On Sept. 9, Mr. Paskins came to New York for what was supposed to have been a three- day business trip — an insurance audit on the 78th floor of the trade center. His remains were identified Nov. 11. The 1976 silver dollar and the special birthday ring were also found and returned to the family.