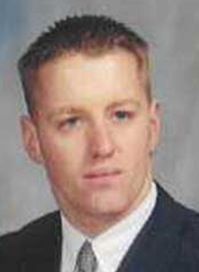 Things were looking up for Christopher Duffy. At 23, he had just moved out of his parents' home in the Crestwood section of Yonkers to his own apartment on 81st Street in Manhattan. He was working as an assistant equities trader at Keefe, Bruyette & Woods on the 89th floor of the south tower of the World Trade Center, ready to work his way up the ladder in the company where his father, John Duffy, was then president.

But the Sept. 11, 2001, terror attacks would abruptly end his aspirations, and devastate the Duffys and the firm they were committed to.

Christopher Duffy was one of 67 Keefe, Bruyette & Woods employees lost in the attacks - a tragic fact memorialized to this day on the company's website. The site lists all of the company's employees who died that day, Christopher Duffy among them. And on the 10th anniversary, John Duffy, now the firm's chairman and CEO, said through a spokesman that he would not comment on his personal loss. While a grieving father, he is also the leader of a company that was crippled in the attacks.

The statement went on to note that the company would mark the 10th anniversary of the attacks with a private gathering at the Central Park Zoo, the site of a memorial plaque to the employees lost in the terror attacks. Among them will be John Duffy.

Some of the Duffy family has left Yonkers since the attacks although other family members remain in Crestwood, including Christopher Duffy's mother Kathy. Christopher was the second-oldest of five children, and an athletic standout at Fordham Prep and, later, Villanova University, where he received a bachelor's degree in finance in 2000.

Christopher M. Duffy was determined. At 160 pounds, he was the fullback on his high school football team. He was captain of his lacrosse team and spent a good part of his time on the field knocking other players down.

But when his two brothers, one older and one younger, both grew to over 6 feet tall and Mr. Duffy stopped at 5-foot-10, he decided he just was not big enough. So he made up for it with muscle. "Chris was the most ferocious of the three of them," said John Duffy, Chris's father.

Chris Duffy was known for his weekend "Duff Jam" parties in high school. When his parents went away, Mr. Duffy and his friends would play. "They covered their tracks," said his father. "But over the years we learned about the extent of the parties."

Mr. Duffy, 23, started working at Keefe, Bruyette & Woods, where his father is president, as an assistant equity trader after graduating from Villanova in 2000. His sister Kara said her brother was a smart dresser, loving to shop at stores like Hugo Boss. Still, outside the office he was often seen in flip-flops and a Hawaiian shirt. His 12 closest friends, who were honorary pallbearers at his memorial service, wore suits -- and flip-flops.