I worked with Catherine at

I worked with Catherine at Goldman, and remember clearly when she moved over to Fred Alger, right b4 9/11. We were all so worried about her on that day. She was a very good, gentle person and while the years pass by, and the seasons change, I want you to know that she has not been forgotten.

I too came to this page after

I too came to this page after reading about your family in the Guardian. Ten years have gone by but I am sure she is still missed and loved. She seemed like someone who was genuinely good and kind-hearted. Her way of living life was truly inspirational. Please accept my condolences and wishes for all those who grieve her to find peace.

Catherine with her sister, 1982 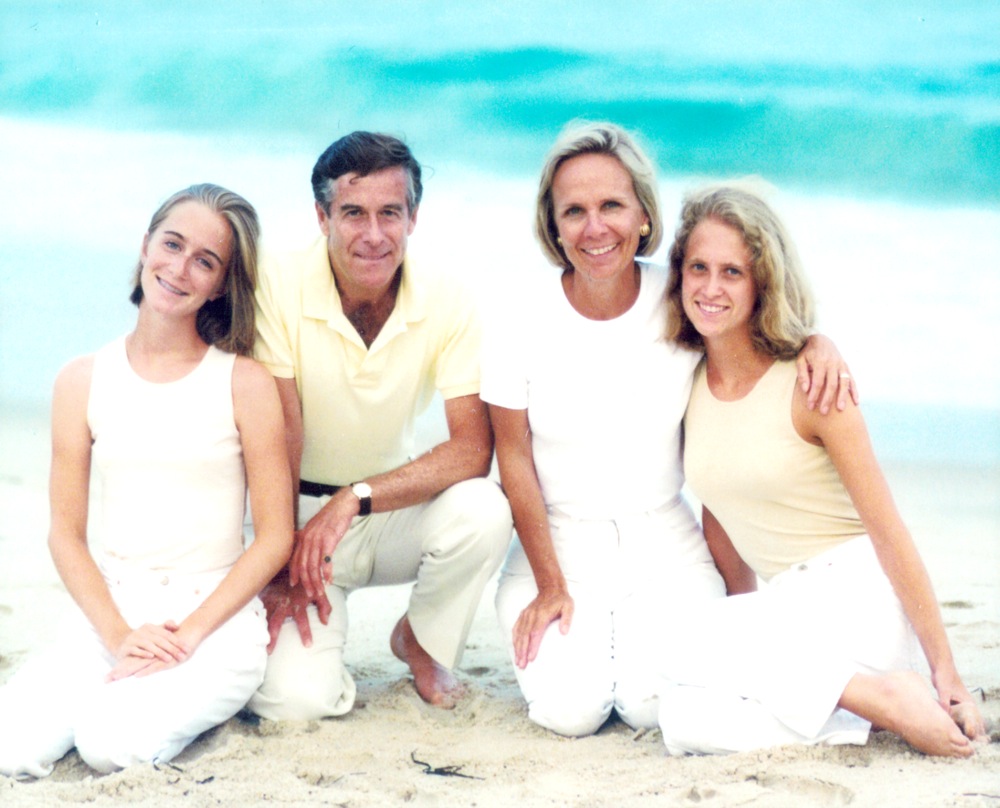 Catherine MacRae and her family, 1996 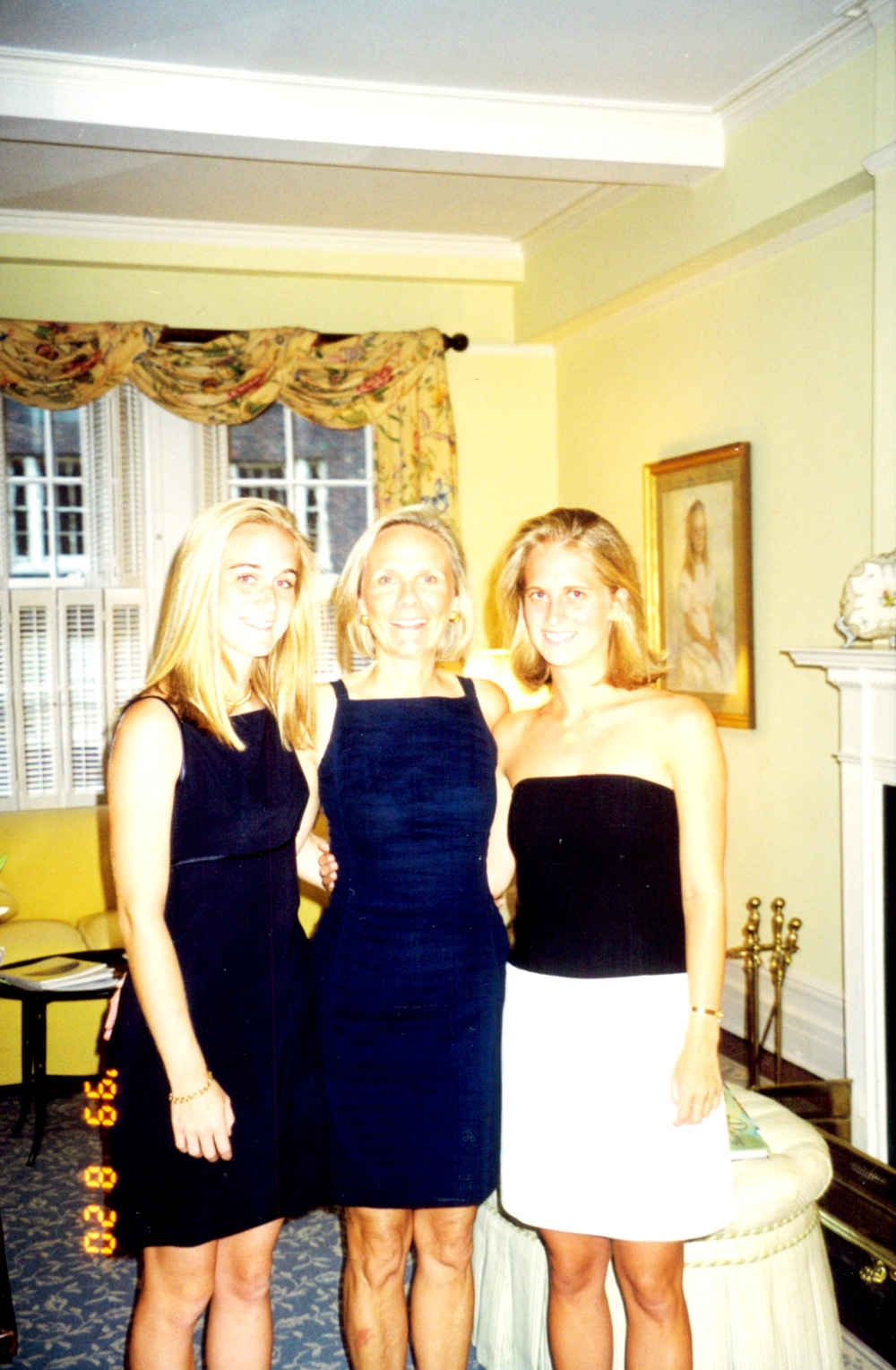 Catherine MacRae with mother and sister, 1999 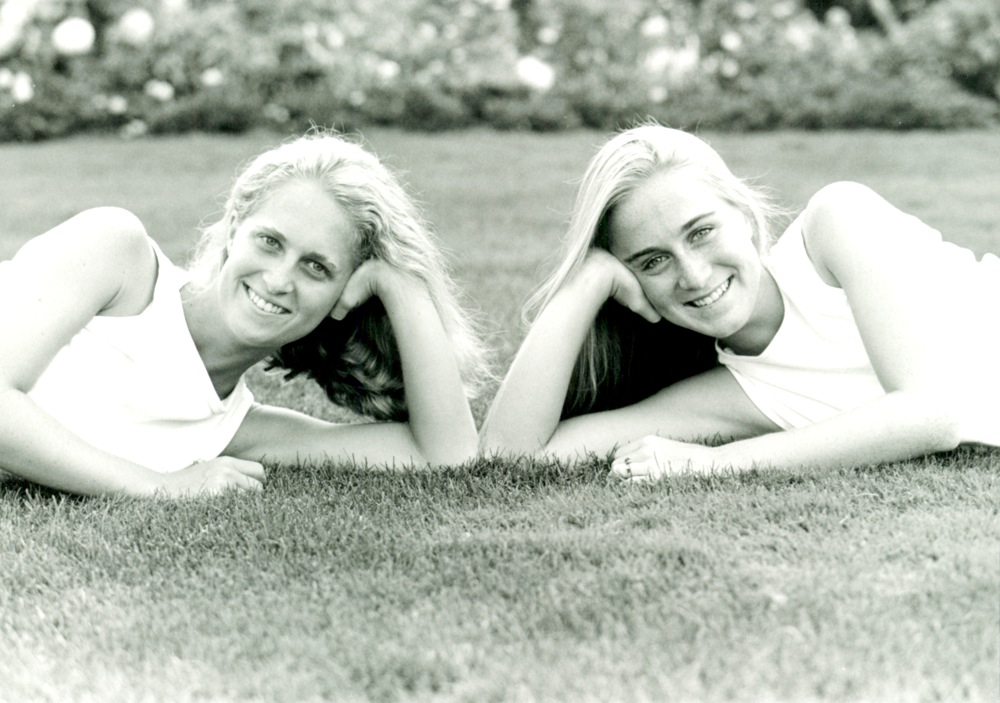 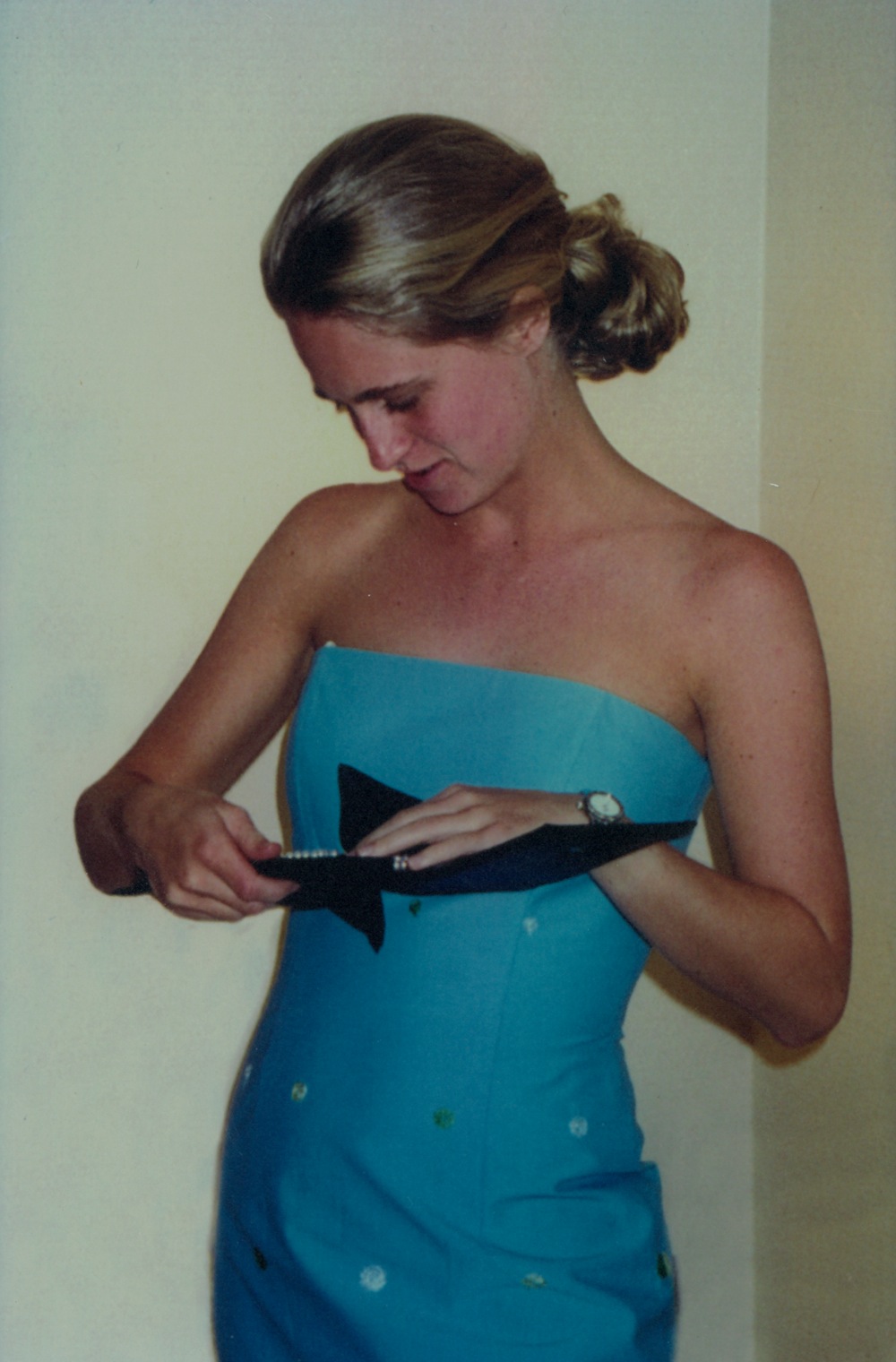 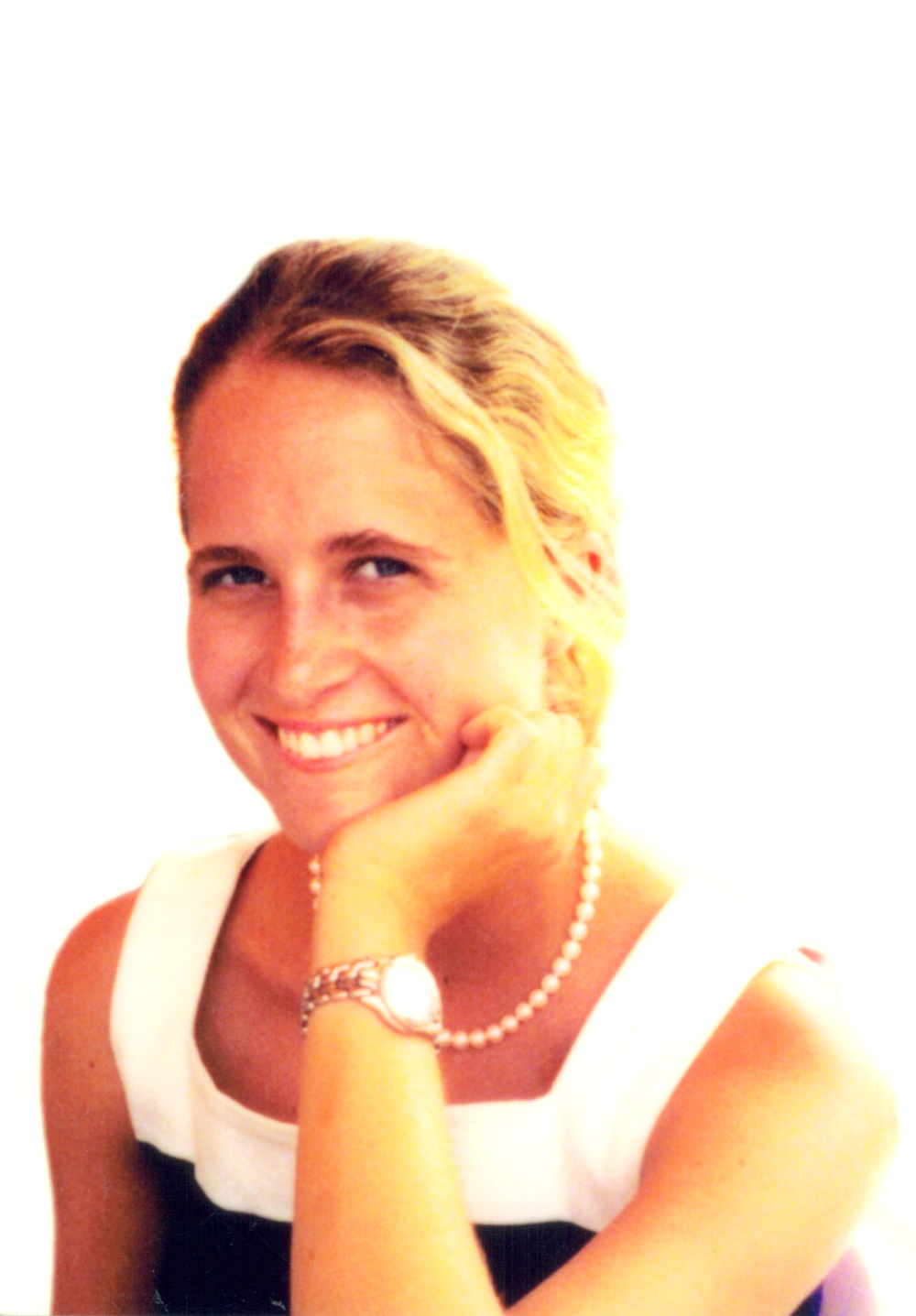 The Fall 2008 Exeter Bulletin that profiles Cameraon MacRae, Catherine's father, and what he has done to commemorate his daughter. Article begins on page 22. 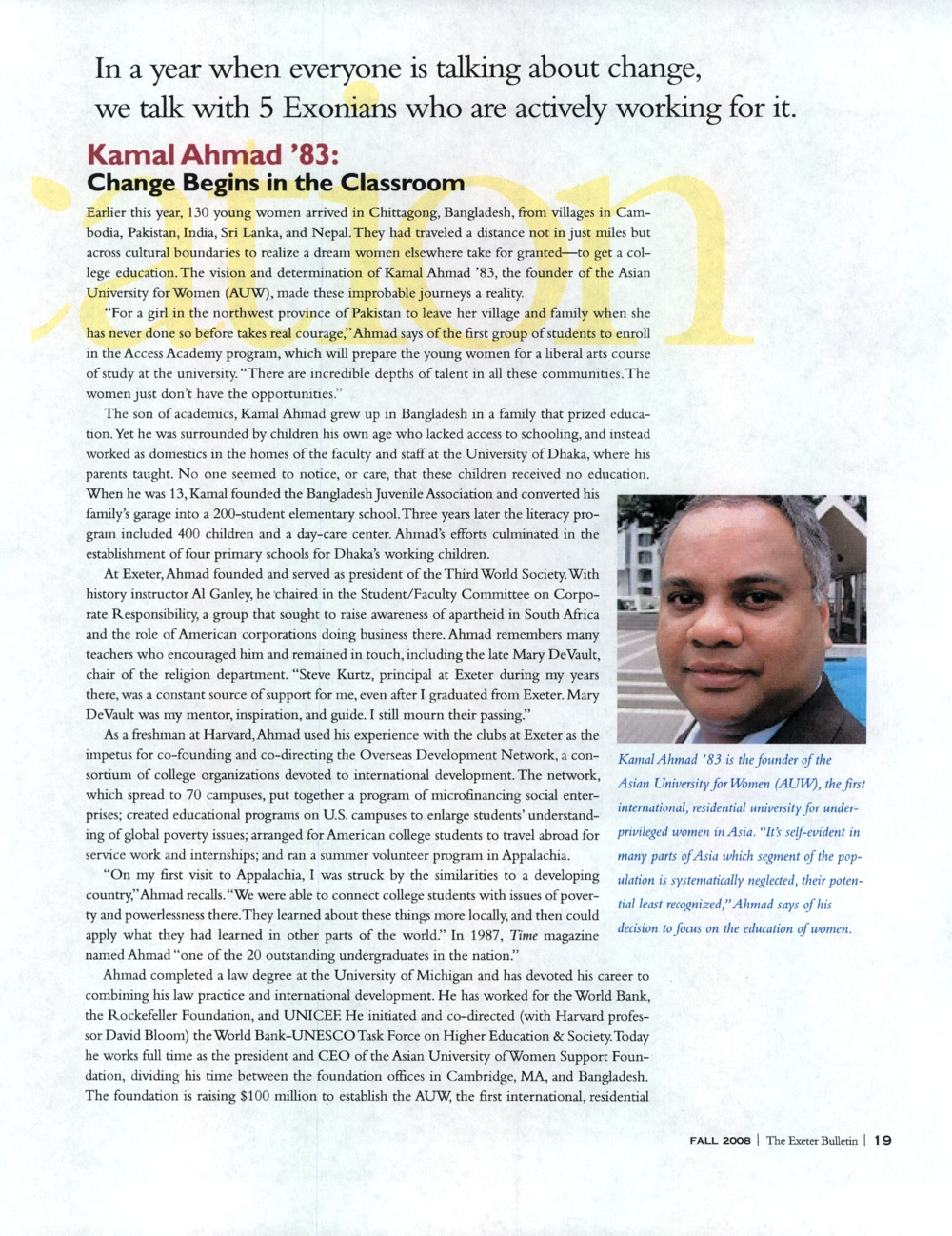 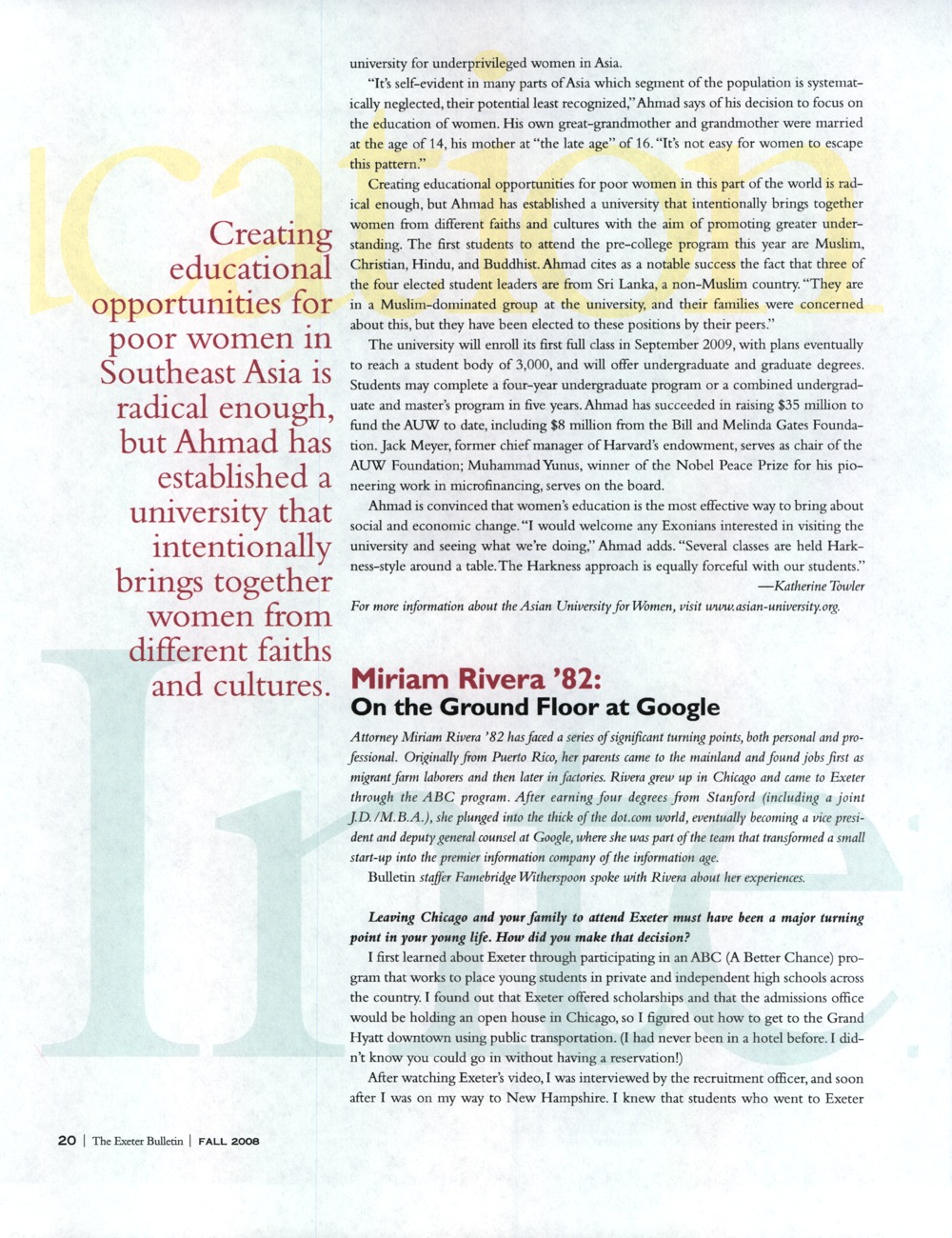 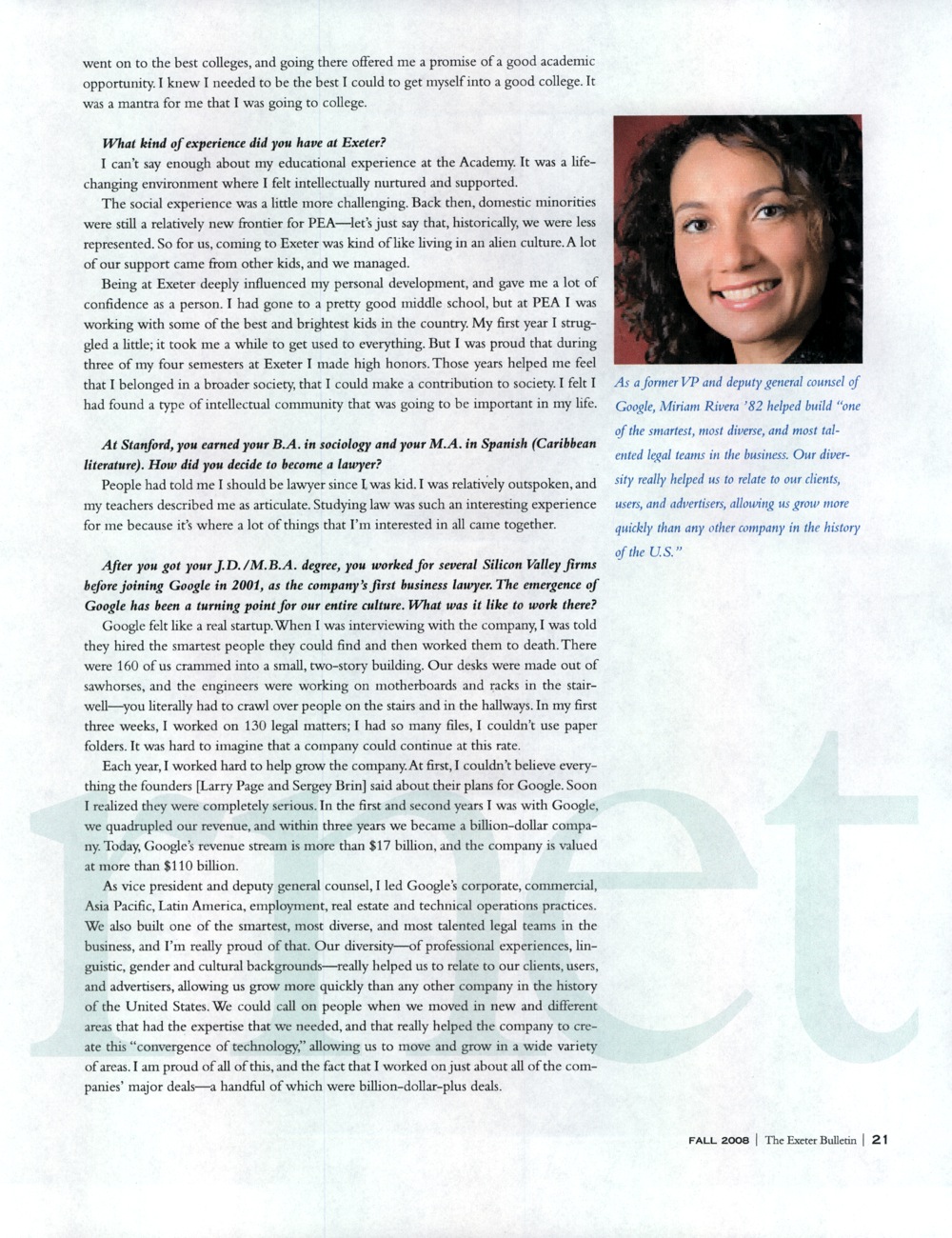 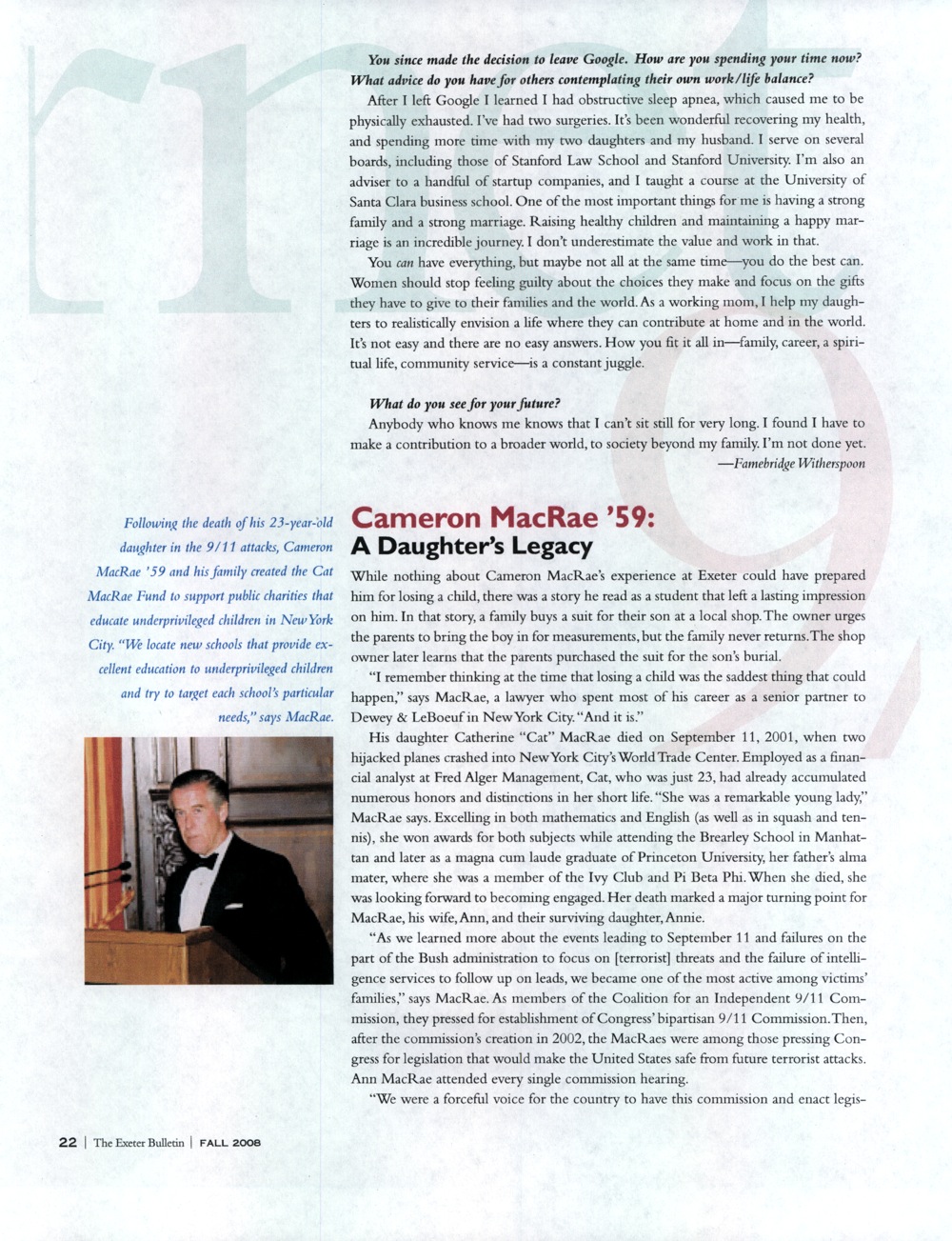 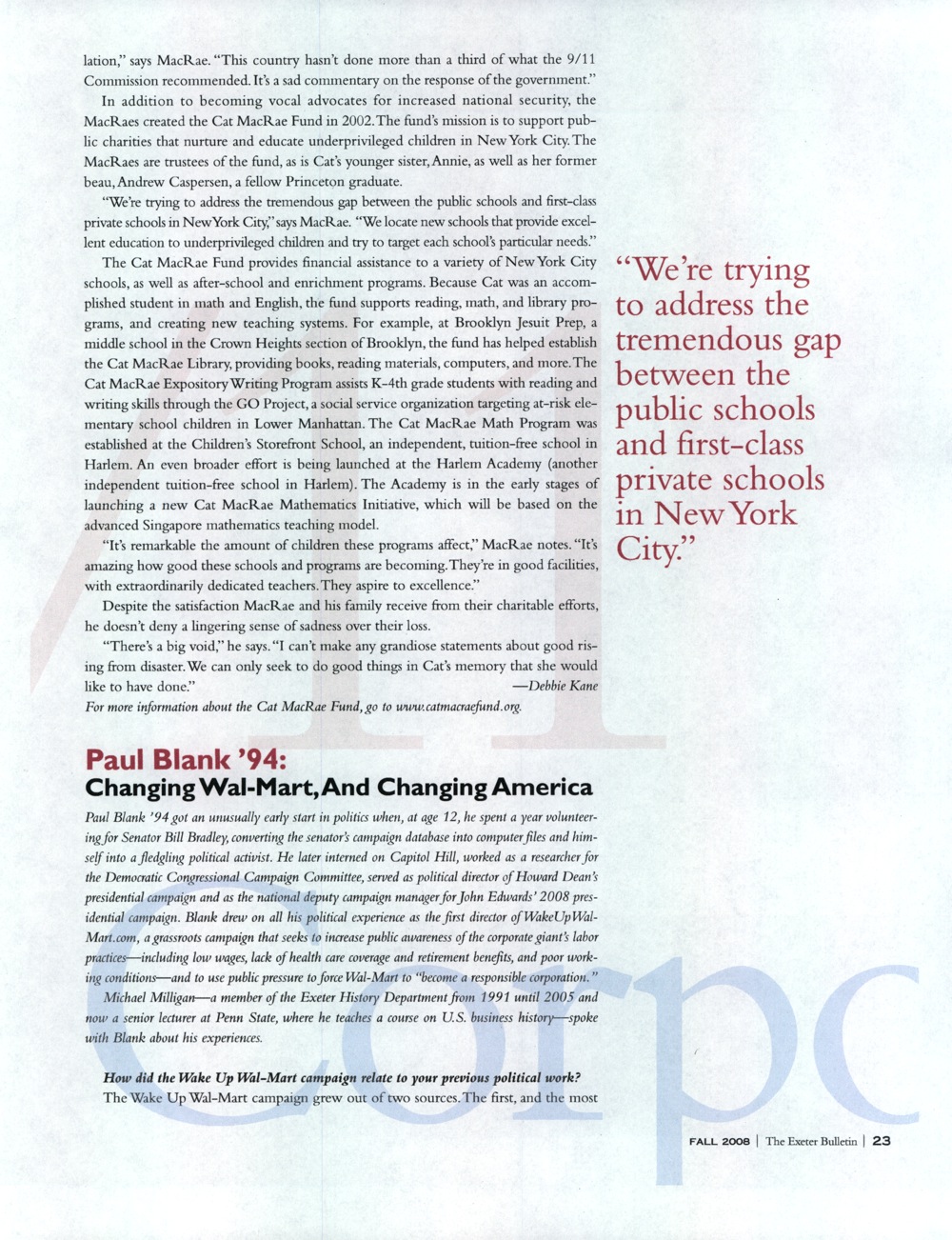 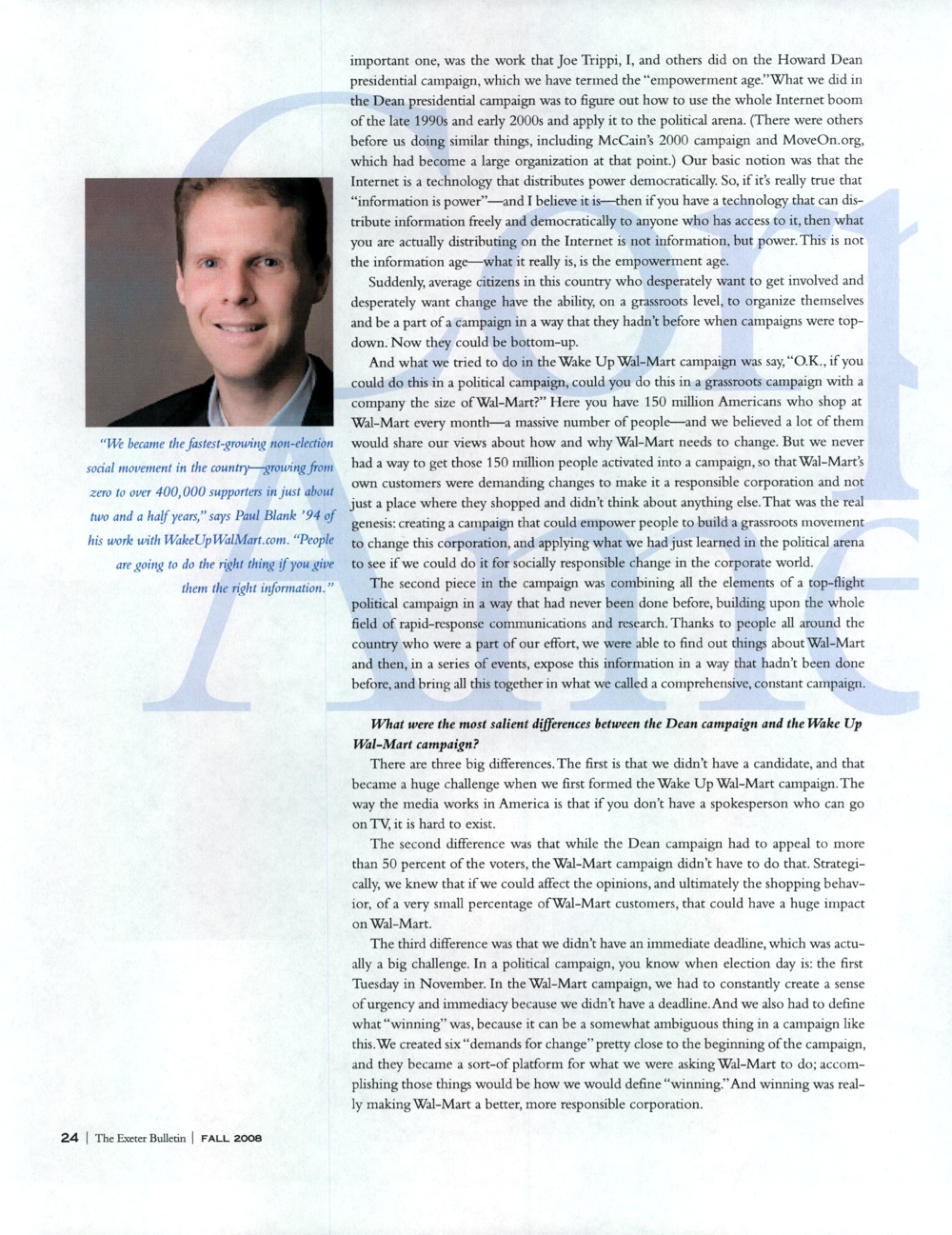 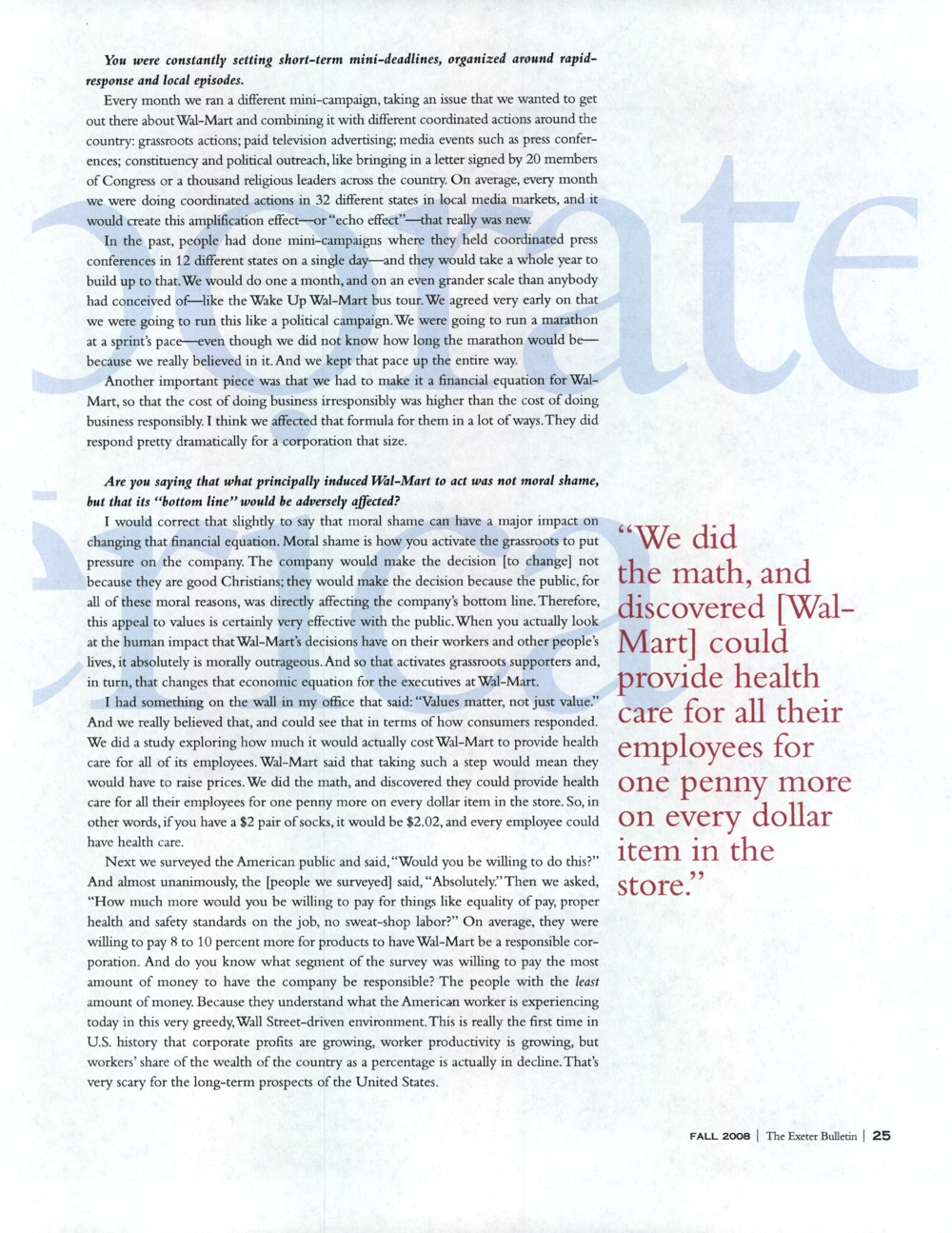 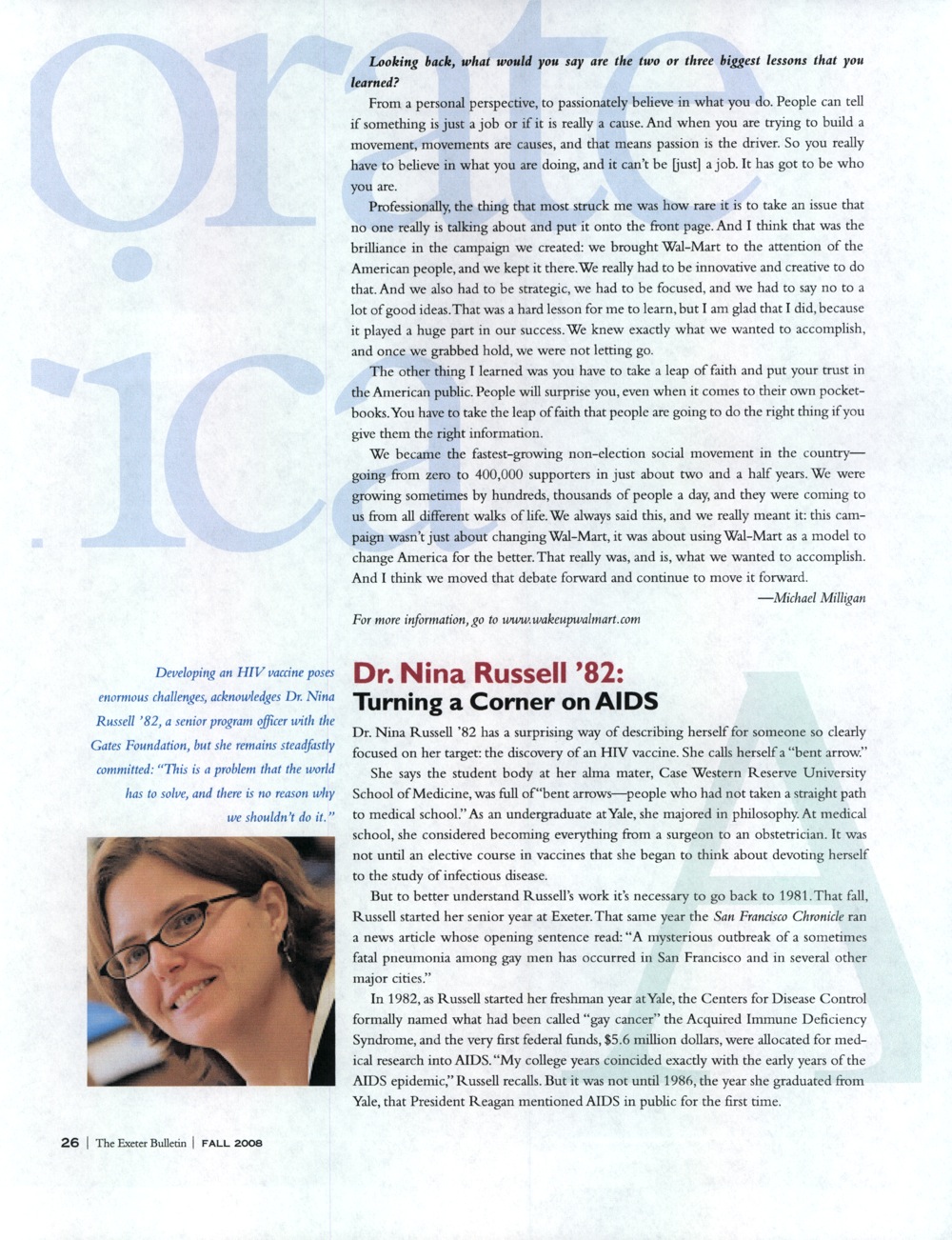 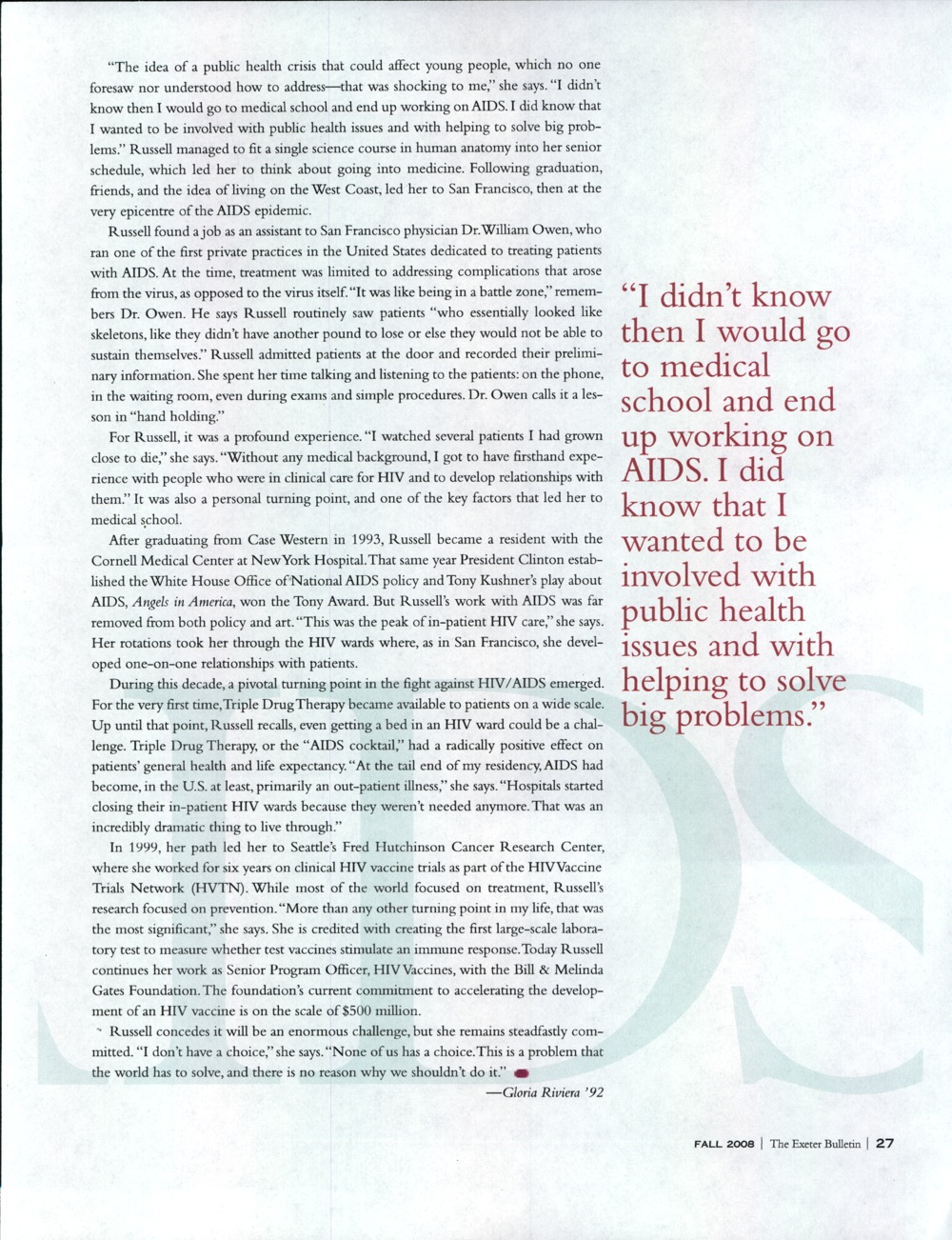 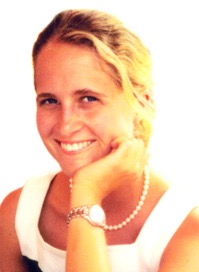 Catherine Fairfax MacRae was a research analyst at Fred Alger Management on the 93rd floor of World Trade Center One. Only a year into her career, Cat had already passed Level One of the Chartered Financial Analyst Exam and was on the fast track to a promising future at the investment house. This was hardly surprising, as Cat always adhered to the highest of standards and did so without the slightest hint of pretension. She had the uncanny ability to achieve excellence with grace, style, and a sense of humor. If you had to sum up Cat in one word it would be love. Love for her family. Love for her friends. Love for humankind. Love for God. Though she was only given 23 years on this earth, she gave back so much more.

Cameron MacRae ’63 describes his daughter as “bright and beautiful, gentle and kind . . . the epitome of all that is good in the world.” This sentiment was clearly shared by the throngs of family, Princetonians, and other friends who journeyed in stormy weather to Cat’s memorial service at St. Andrew’s Dune Church, nestled in the sand dunes of Southampton, New York. Just before the service began, the rain subsided and the 40-mile-an-hour gusts settled down into a gentle breeze. And during the service, as the speakers recalled Cat’s boundless love and generosity, sunlight flooded the church in a way church parishioners had never witnessed. It was Cat’s love once again.

The question, at last, is put to Andrew Caspersen: Did your girlfriend have any flaws?

Cat was never late and expected the same when you met her for dinner. She was inexhaustibly thoughtful, always checking in, sending small gifts, and fretting that she was not being a good enough friend, seemingly to hundreds. She was beautiful and funny and charmingly self-deprecating and talked on the phone to her mother at least three times a day.

People always wanted her at their parties.

She was 23, and a stock analyst at Fred Alger Management on the 93rd floor of 1 World Trade Center.

"She was not great with driving directions and we'd get lost quite often," conceded Mr. Caspersen, a Harvard law student. "But that was a bonus. It allowed us to spend more time together."