love to had known you carl.

love to had known you carl. my love goes to you and your family

Hey I feel sorry for your

Hey I feel sorry for your loss. I know what its like to lose family because off this. I am thankful that your family member served for the fire department when this happened. i feel that he did what needed to be done unfortunately he did not live through this tragic event. I am happy to say that my step father is fighting to avenge the lives that were taken on that horrible day. My deepest condolences

Posted by Nick A.

I'm sorry for your loss. You

I'm sorry for your loss. You were very brave giving yourself up for others. 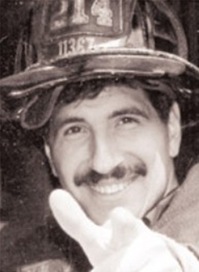 Sometimes, Carl J. Bedigian did not seem real to the woman who had been his wife for less than a year. A firefighter with Engine 214 in Brooklyn, he once donated his bone marrow to a 4-year-old boy in Europe he had never met, Michele Bedigian said. He had a "magical" smile, and "a beautiful way of making people comfortable around him," she said. "Sometimes I think he's an angel. Sometimes I think he wasn't really a person." In 1998, Mr. Bedigian fell ill when a small hemorrhage near his spinal cord paralyzed him, but he defied the odds and walked again within months out of the sheer power of his will, Mrs. Bedigian said. The experience made the couple live every day as if it were their last. They traveled, they planned a family. Mr. Bedigian, 35, stayed committed to the Fire Department and had "a constant ambition to do more to help people," she said. Mr. Bedigian was buried November 5. 2001. "That was Carl's calling," his 31-year-old widow said of his life as a fireman. "As painful as it is, I'm incredibly proud of him."