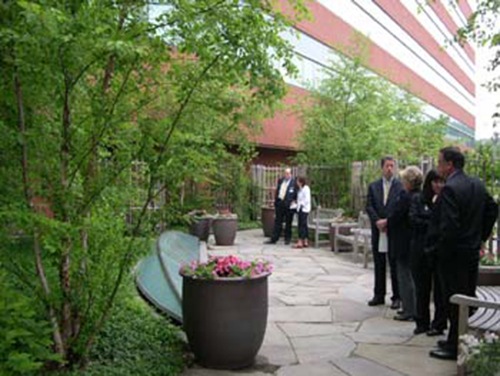 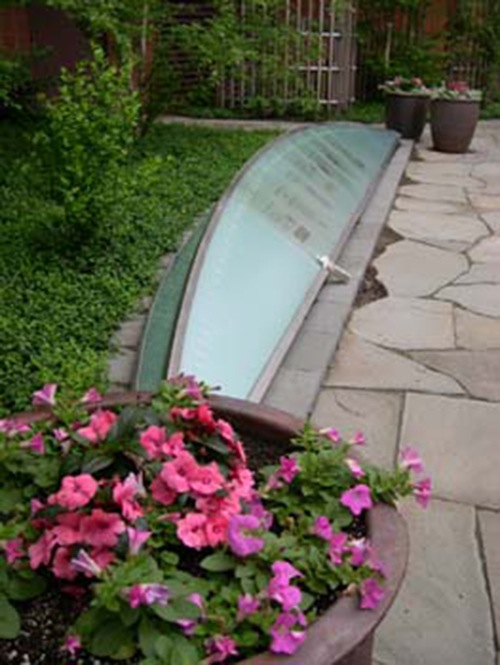 the seven TJX employees who died of September 11.

It was designed by the family members to celebrate the lives of the seven people who were lost, and I think it does that,” said Alayn Ingham, an Associate Relations Specialist for TJX. It was created through an ongoing process of regular family meetings over the course of 6-8 months. Starting in January of 2002, at the encouragement of C.E.O. Ted English, the family members worked together with TJX Associates, Sasaki Associates, and other contractors to talk about and design the memorial. The garden is an experience for the five senses, including the dappled light of the river birches, the smell of lilac, soothing music 24 hours a day, and the personalized words of remembrance selected by the family members. Reason site was selected: Choosing the site was one of the first tasks that TJX and Sasaki undertook in creating the garden. “This site was selected because it is on the southern side of the building and gets a lot of light. The child care center adjoins the site right on the other side of the entranceway, so you can hear the children playing, which was important. It is more of an associate entrance to the building and less of a public entrance to the building. We wanted it close to an entrance where there is a lot of traffic and activity. It is always close to the heart and not far away where it would be a destination to which you would have to choose to go,” said Michael Brogan of TJX Office Services. Events planned for site: The garden was dedicated in August of 2002 in two stages, with a private service for the family members, and a public dedication and memorial service for the entire company. Friends and colleagues of those who died spoke words of remembrance and the Associates were invited to see the garden for the first time. On a daily basis, the site is open to the public and invites quiet contemplation. The group noted that they have seen people sitting as individuals, visiting in groups, coming on special occasions, and even leaving mementos behind. It is a site that is used by both family members and associates alike. Do you believe your memorial is a sacred place?: “It’s as close to sacred as you get,” said Brogan. “It brings all the women together in one location and celebrates their lives.” The inscriptions are all heartfelt and very specific to each of the women. The site will be meticulously maintained, and constantly visited. It’s a memorial.” Ingham added that it is an important part of the facilities tour when new employees join the company, as a way to tell the story of those lost and introduce newcomers to the culture of caring within this corporation.