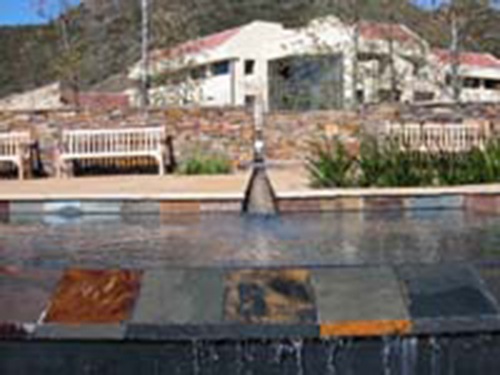 The Heroes Garden was created to honor the memory of Americans who lost their lives to terrorists on 9-11-01, and particularly to honor Pepperdine alumnus Thomas E. Burnett, Jr., who died on Flight 93. The garden's plaque reads as follows: "Dedicated to freedom's heroes of September 11, 2001, and the passengers of United Airlines Flight 93, among them Pepperdine alumnus Thomas E. Burnett, Jr., who sacrificed their lives to overcome terrorists intent on destroying American lives and landmarks in our nation's capital. We shall never forget." Reason site was selected: The site was selected because it is a prominent location on the campus, on a hillside overlooking lower campus and the Pacific Ocean. Also, it is adjacent to the Villa Graziadio Executive Conference Center, and Tom Burnett was an MBA alumnus of the Graziadio School in Business and Management. Events planned for site. It is primarily intended to be a place of private reflection, but the University is open to the idea of small gatherings of various kinds, as well as the opportunity to open up the space to larger groups on Memorial Day, Veterans' Day, and 9-11. Do you believe your memorial is a sacred place?According to Jerry Derloshon, the Heroes Garden is a revered space. He said "we believe that the events of 9-11 impacted and changed the world, and having a space on campus that forever recalls those who died is necessary to insure that future generations never forget."