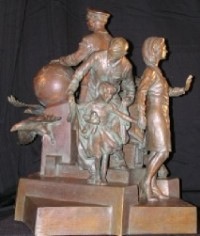 Shortly following the events of 9/11 an American Flight Attendant, Valerie Thompson, formed a foundation dedicated to the memory of the flight crew members. She and her husband, Dean, have continued their vision for six years. They have been joined by numerous members of the aviation community. Now is the time to honor our professionals who crewed American Airlines Flights 11 and 77 and United Airlines Flights 93 and 175 and their passengers. The First National Flight Crew Memorial will be placed in Grapevine, Texas, just north of Dallas Fort Worth International Airport. The city has facilitated the gift of the site from the Westwood Development Group where they will build a fountain to surround the memorial, provide landscaping, parking and benches. The site is located on the SW corner of Northwest Highway and Texan Trail in the new GrapeVine Station Development and will provide outstanding access to the public. The 9/11 Flight Crew Memorial Foundation will dedicate the memorial as a gift to the city who will remain the caretakers of the memorial. This memorial is important to the history of aviation; it also honors those who continue the quest for excellence in the skies each day. Much progress has been made on this project, including selecting the sculptor – Bryce Cameron Liston, approving the design, creating and receiving the models, and beginning the bronze work process. The memorial site has been donated and perpetual care and maintenance secured for the finished memorial. Grass roots volunteers have been tireless in their efforts and vision to build this memorial. The Dedication took place on July 4th, 2008 in Grapevine, Texas from 10am to Noon.

Almost a thousand attended when the 9/11 Flight Crew Memorial was dedicated in Grapevine, Texas on July 4, 2008. The memorial is dedicated to the flight crews of American Airlines Flights 11 and 77 and United Airlines Flights 93 and 175 and their passengers. The figures featured on the bronze monument include two captains, two flight attendants, and a child representing the travelling public. The driving force behind the monument was Valerie Thompson, a flight attendant herself, who formed a foundation dedicated to the memory of the flight crew. Donations funded the building of the memorial, and the site was a gift of the Westwood Development Group.