My son is Syndia S. Nedd his

My son is Syndia S. Nedd his father is Syndia Jerome Nedd they are part of a very large family coming from Barbuda Antigua I don't know if your beloved Jerome is my sons family but they are probably cousins. God rest his soul and give your family peace and tranquility in the days and future to come. 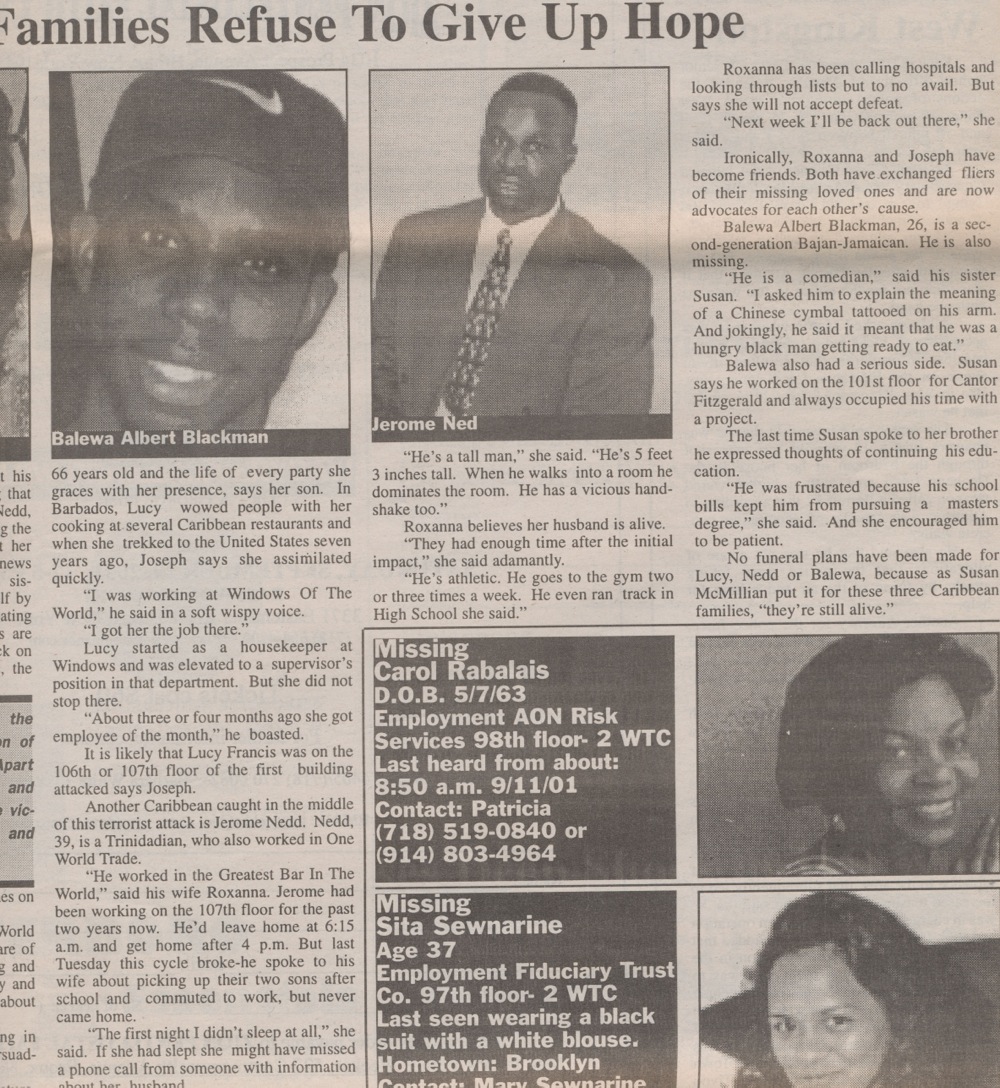 Article pertaining to Jerome Nedd in CaribNews (inside) - September 19, 2001 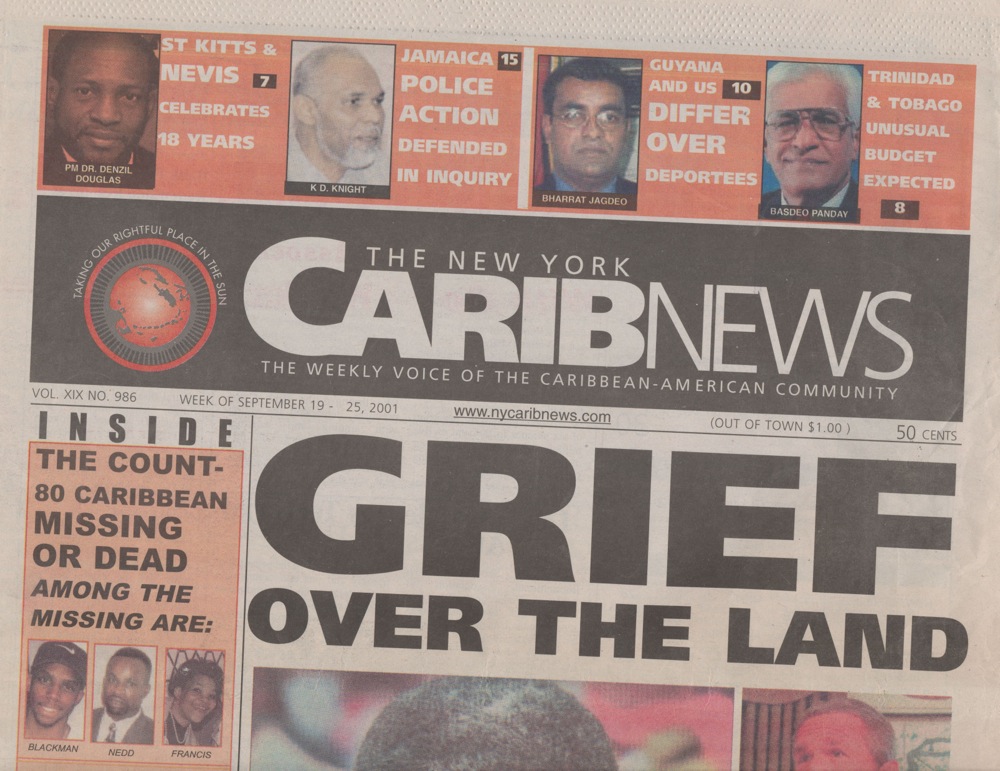 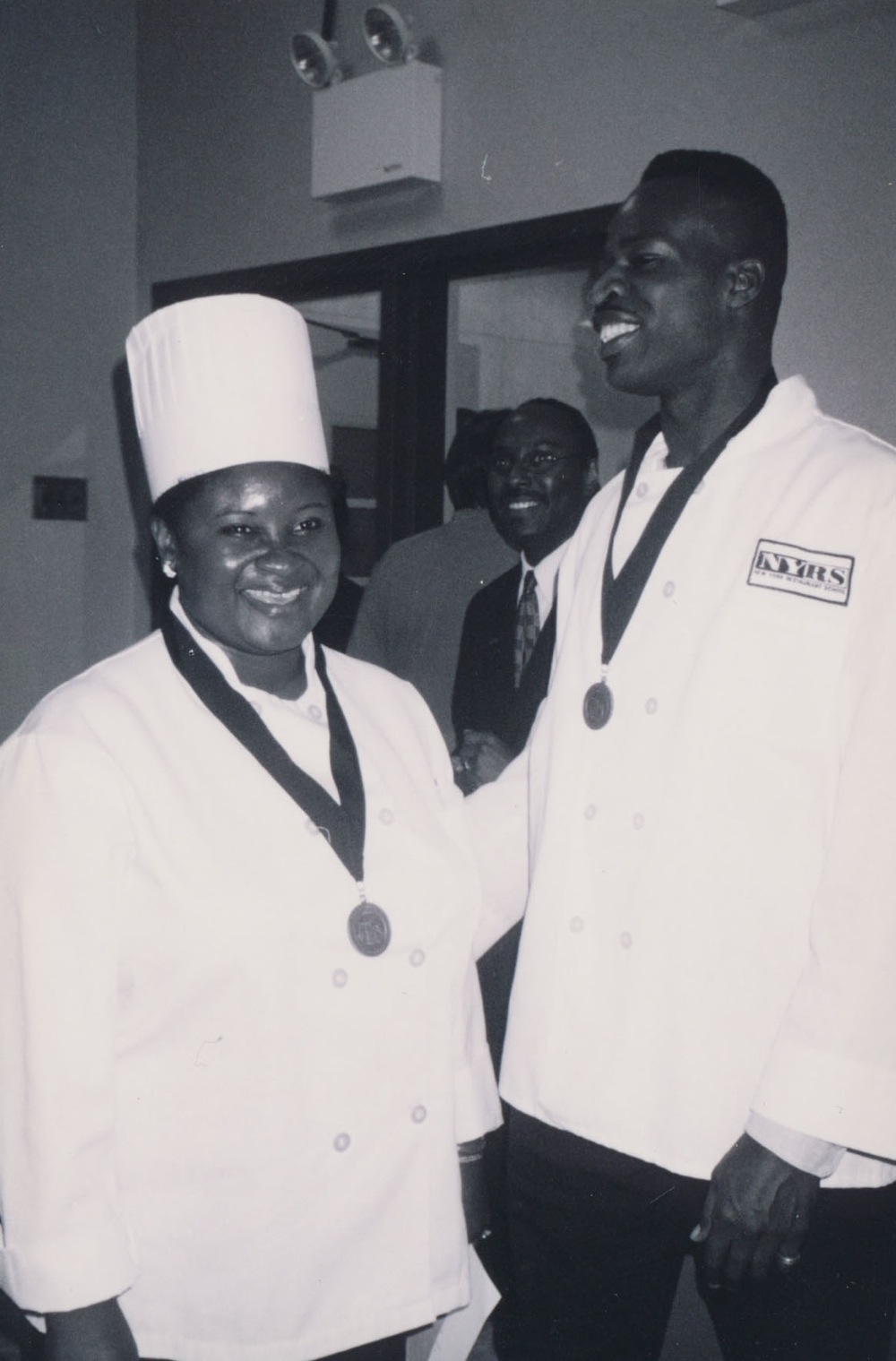 Jerome and his classmate Nancy graduating from NY Restaurant School 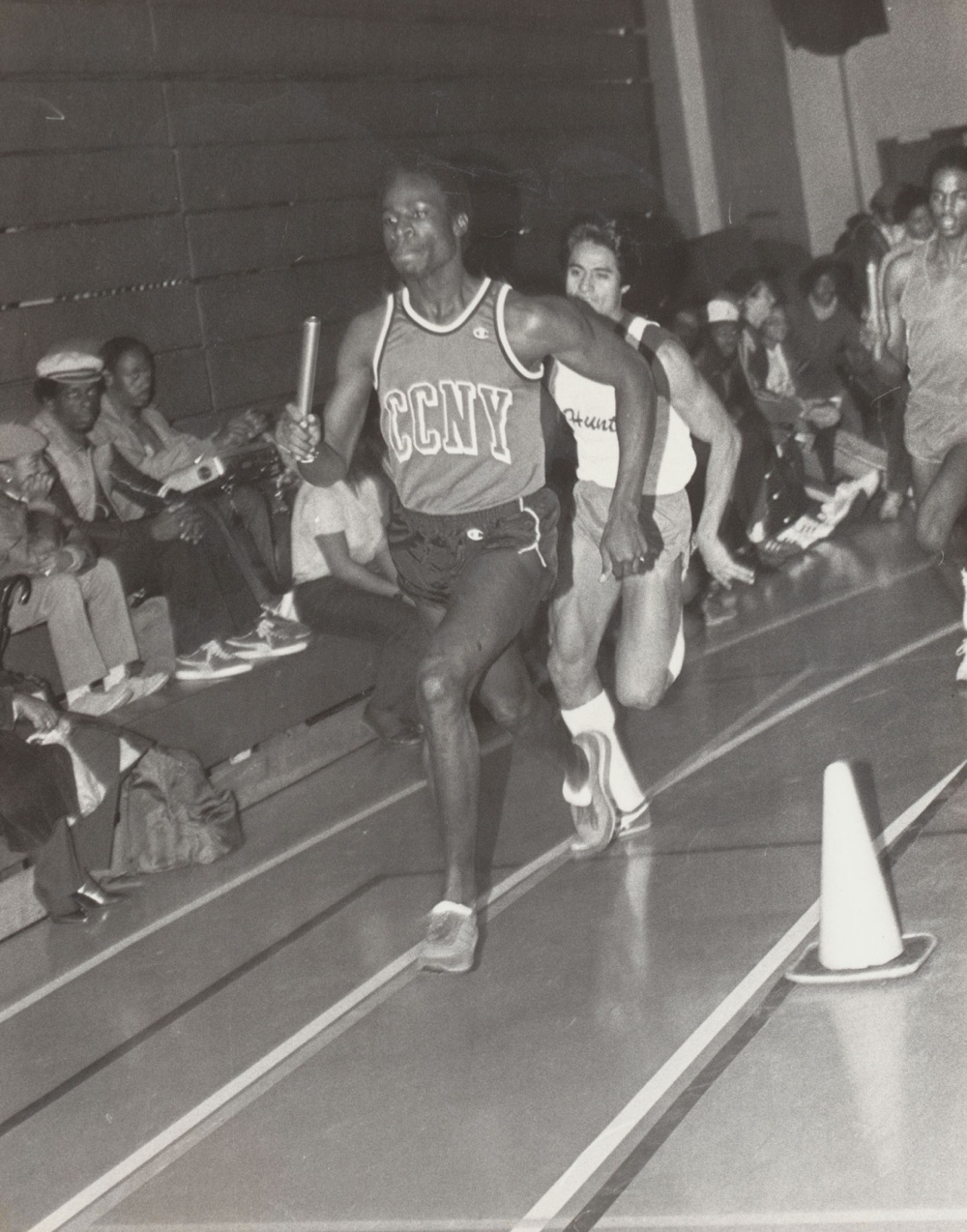 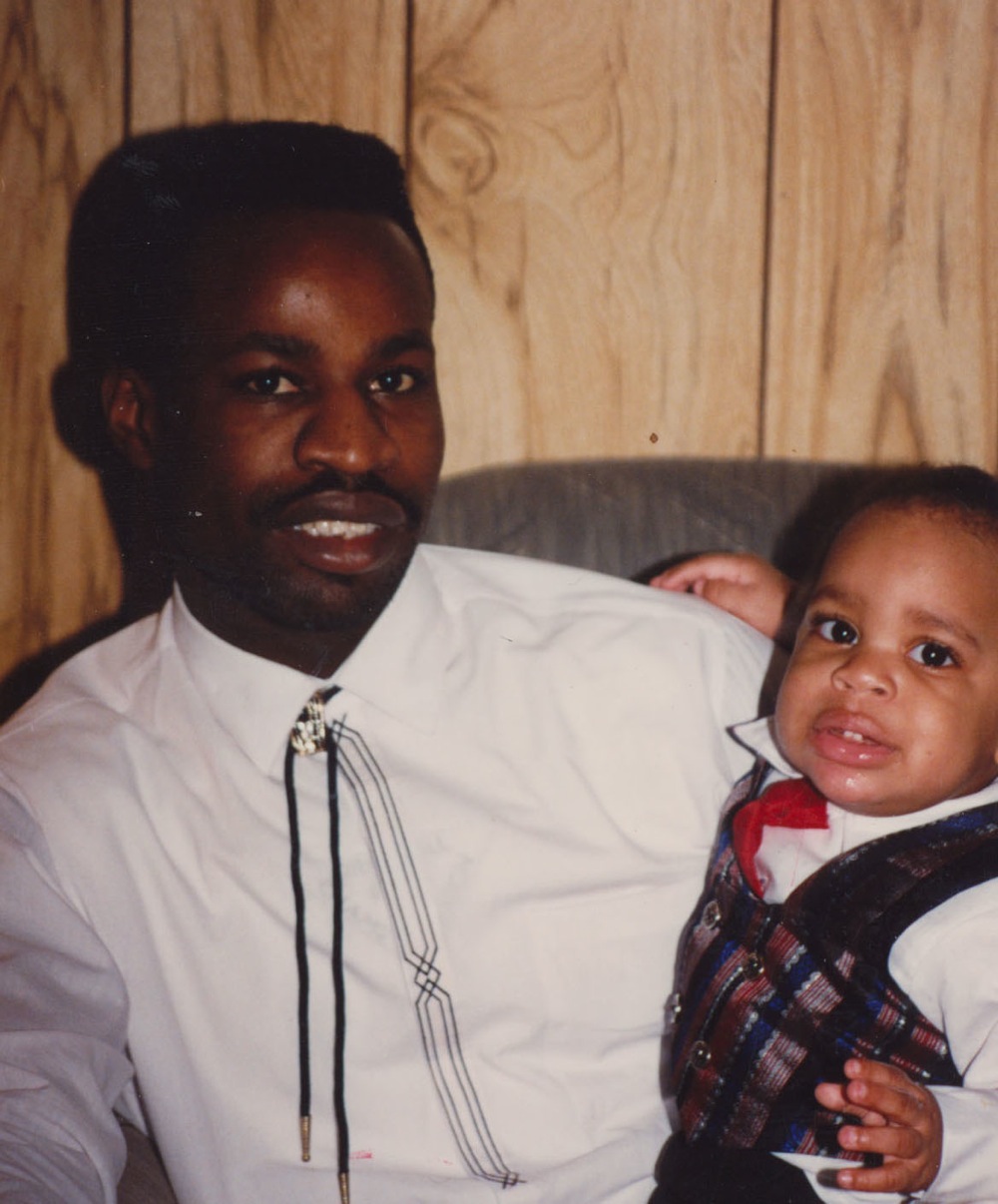 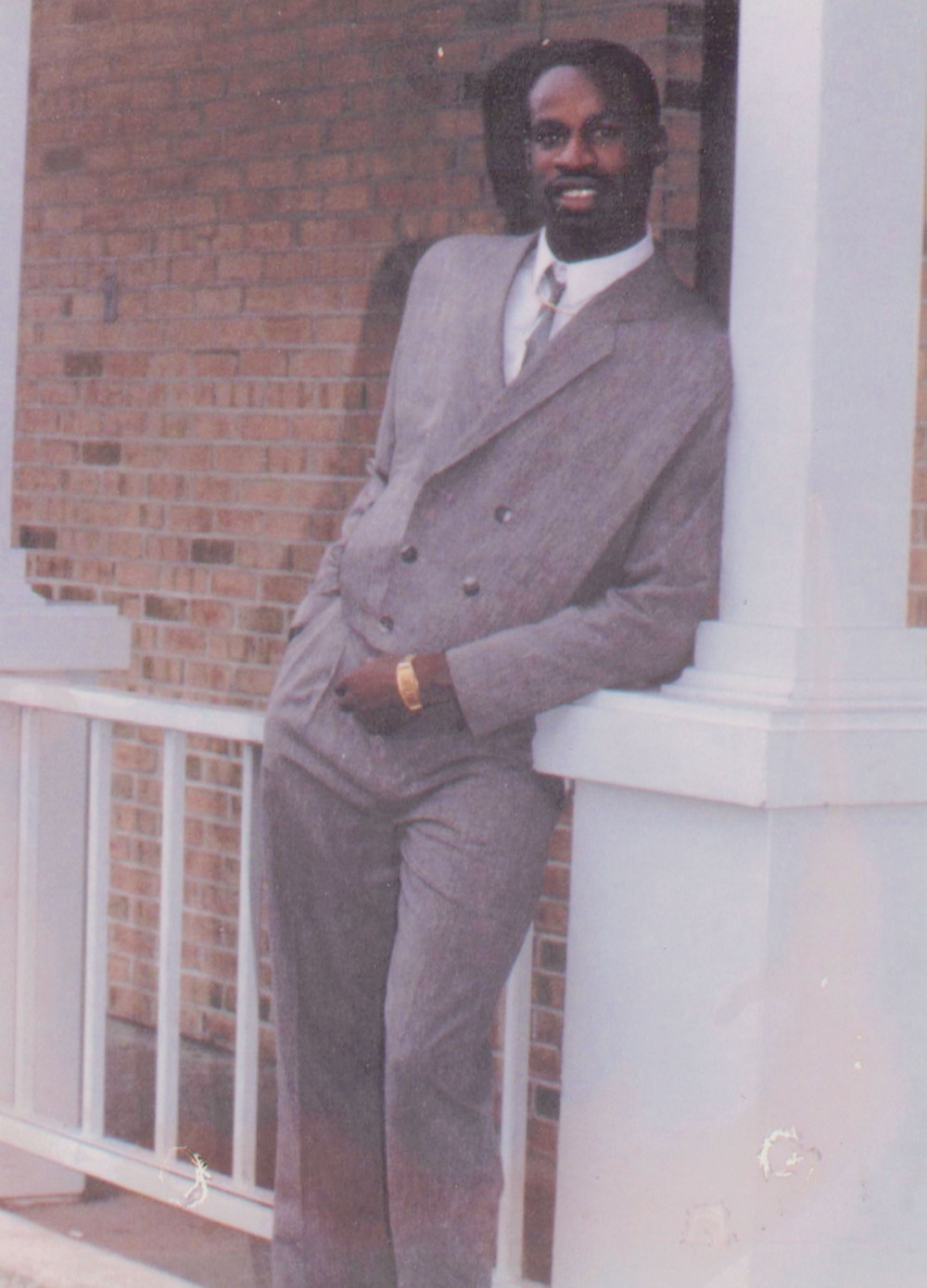 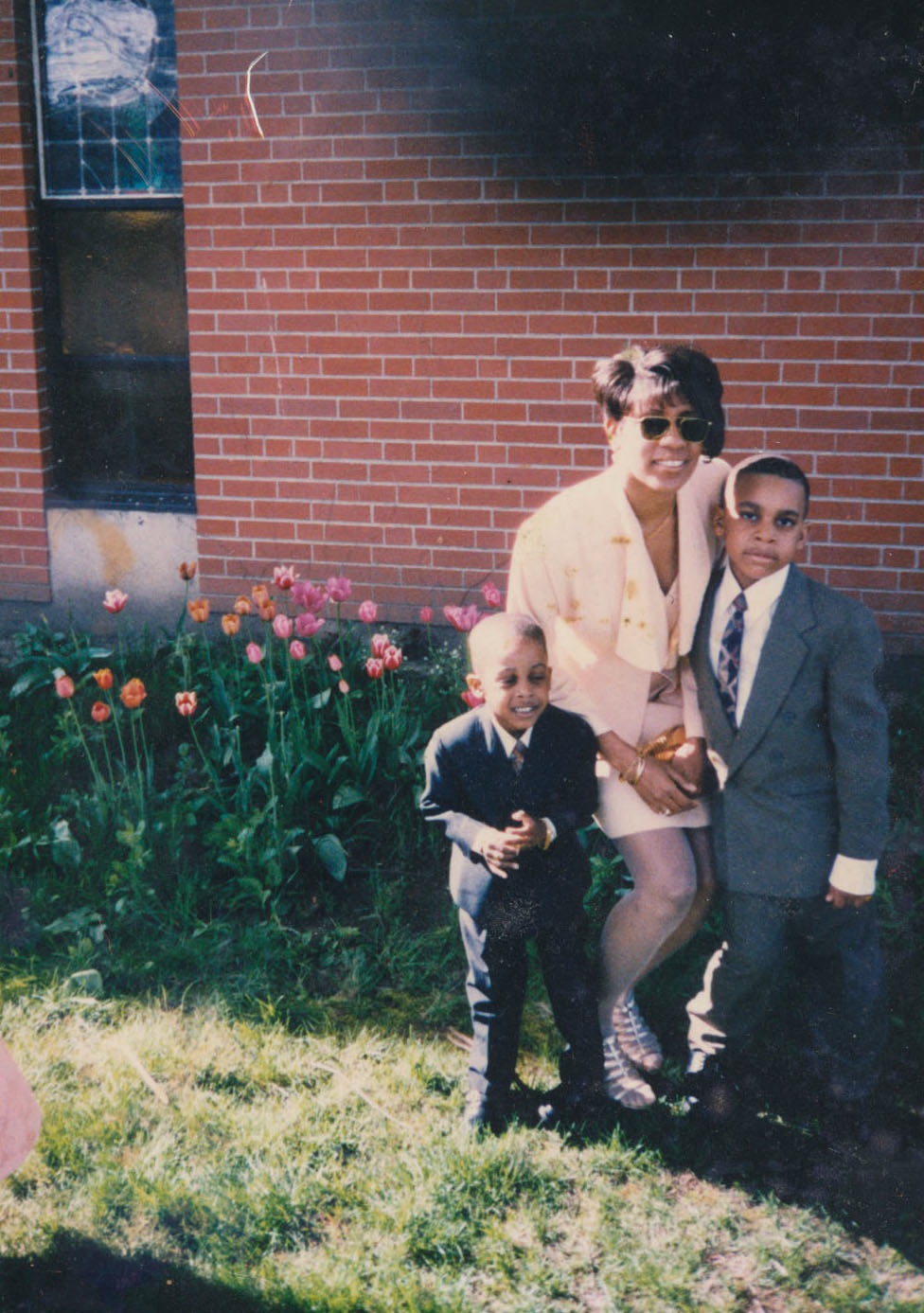 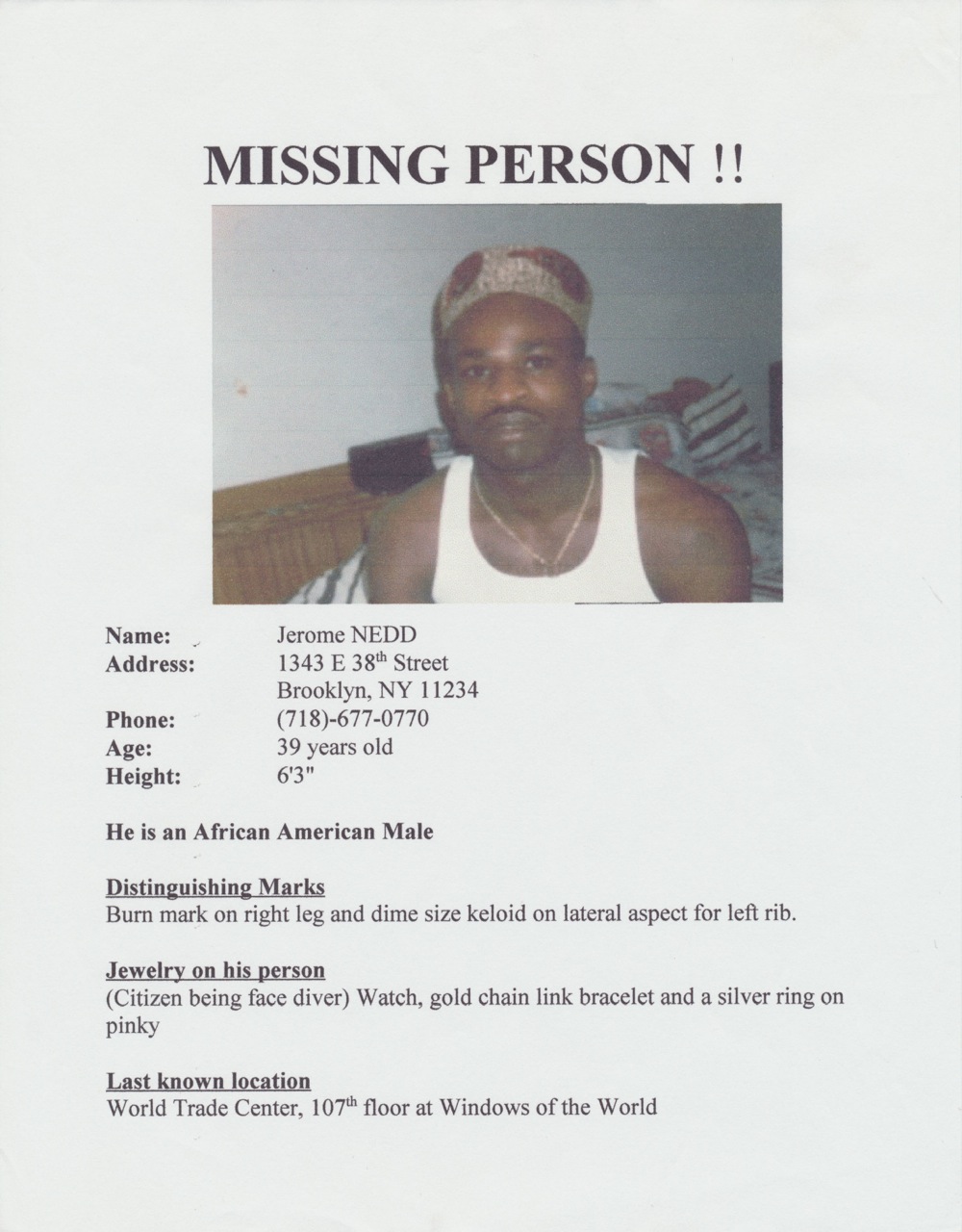 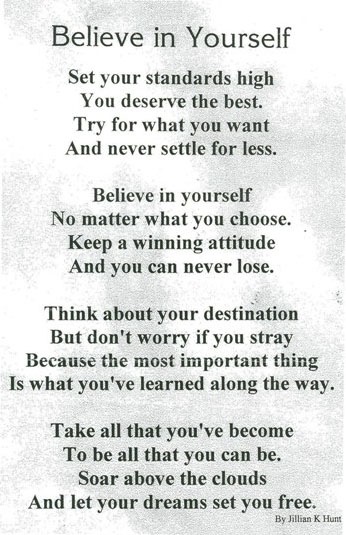 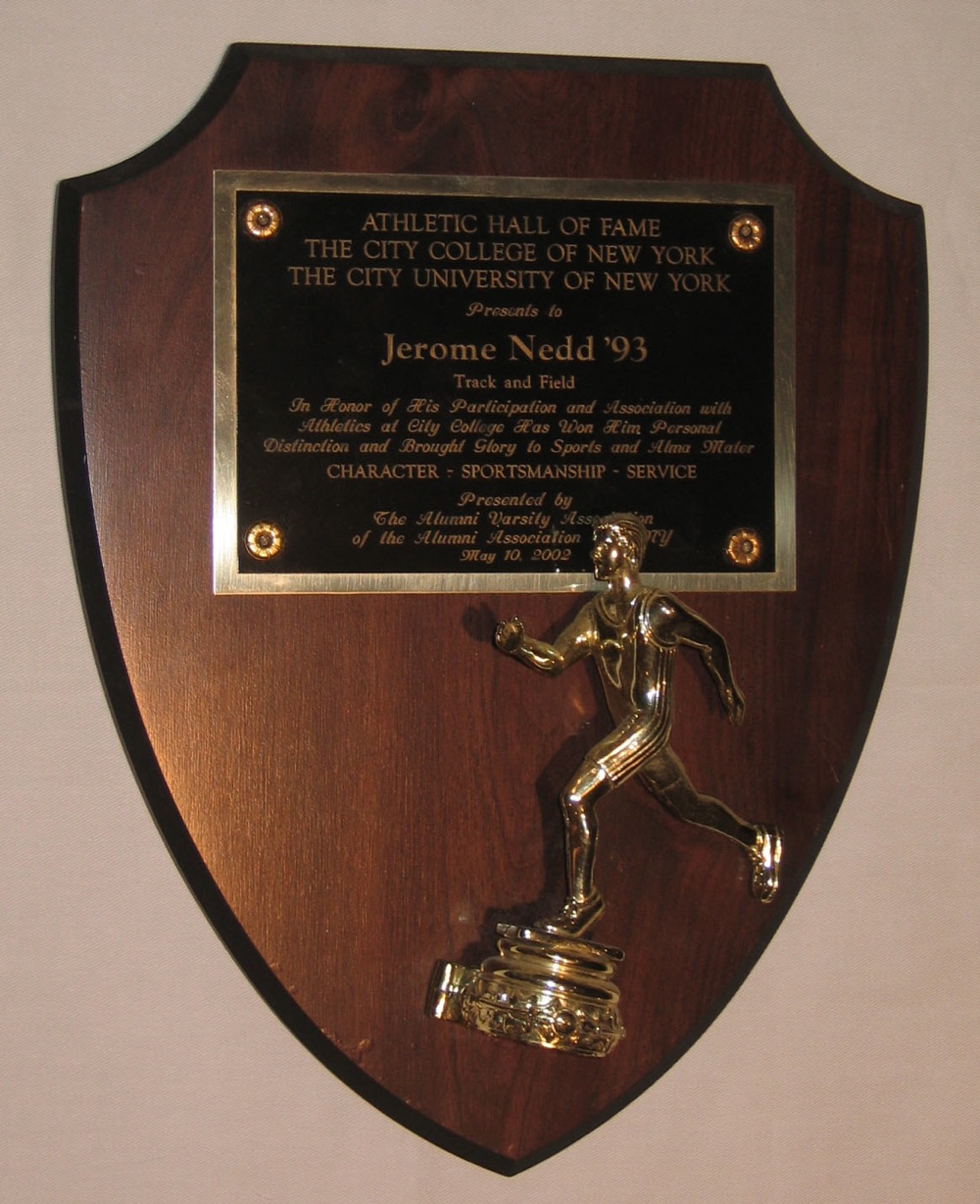 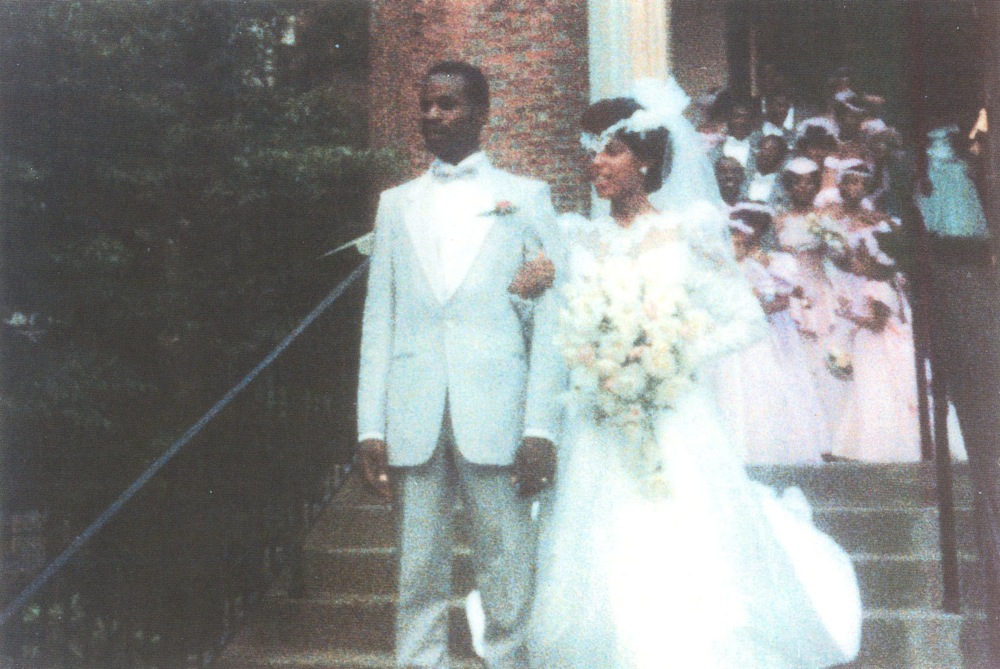 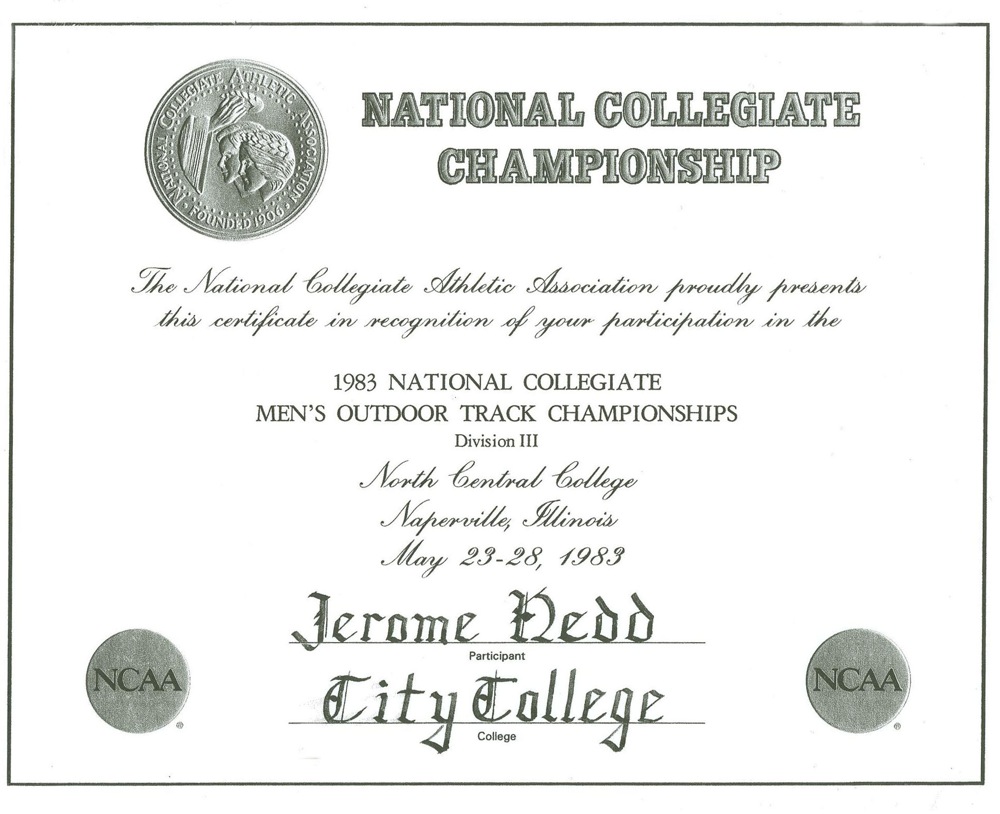 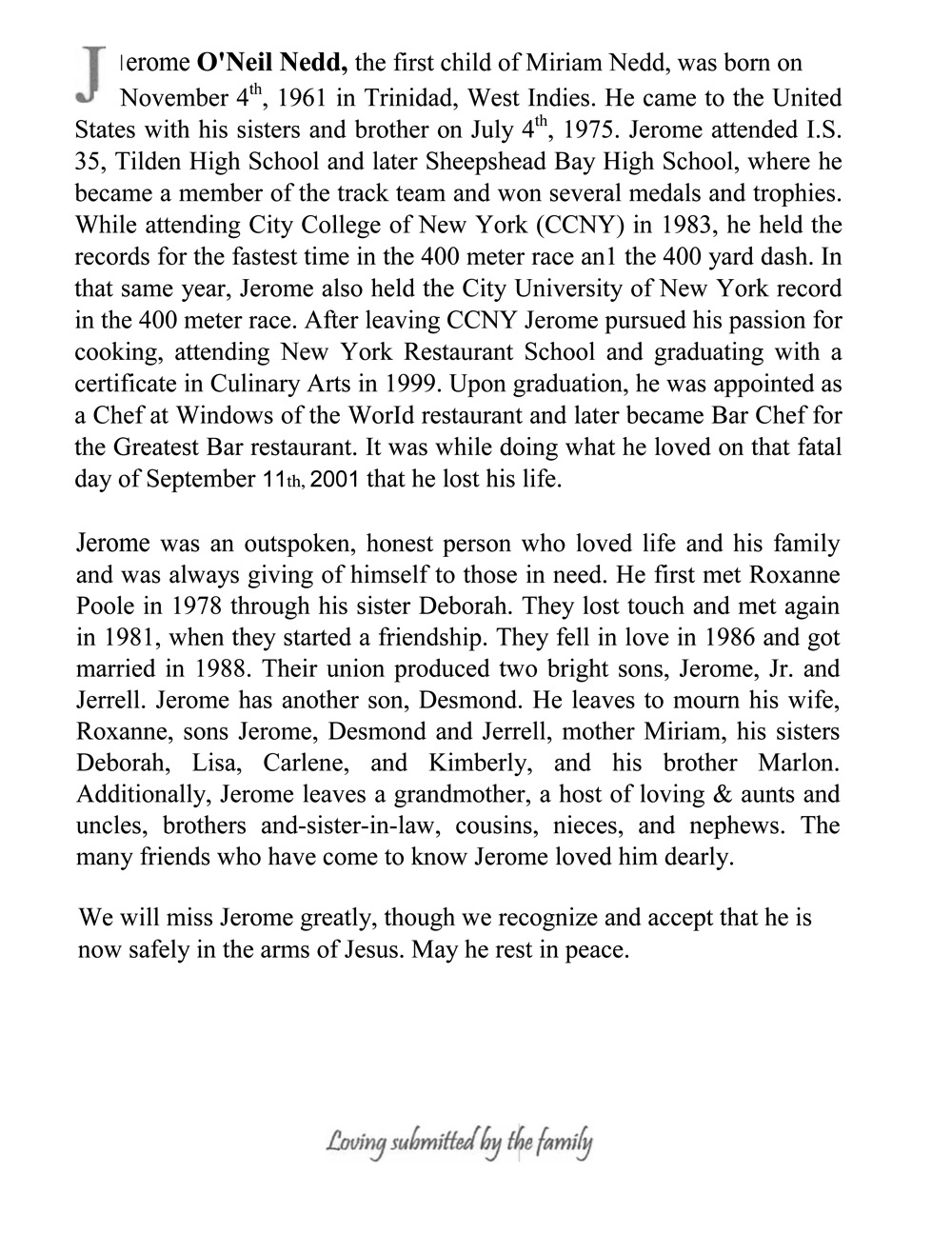 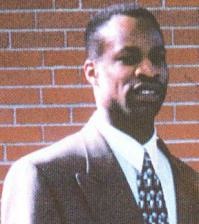 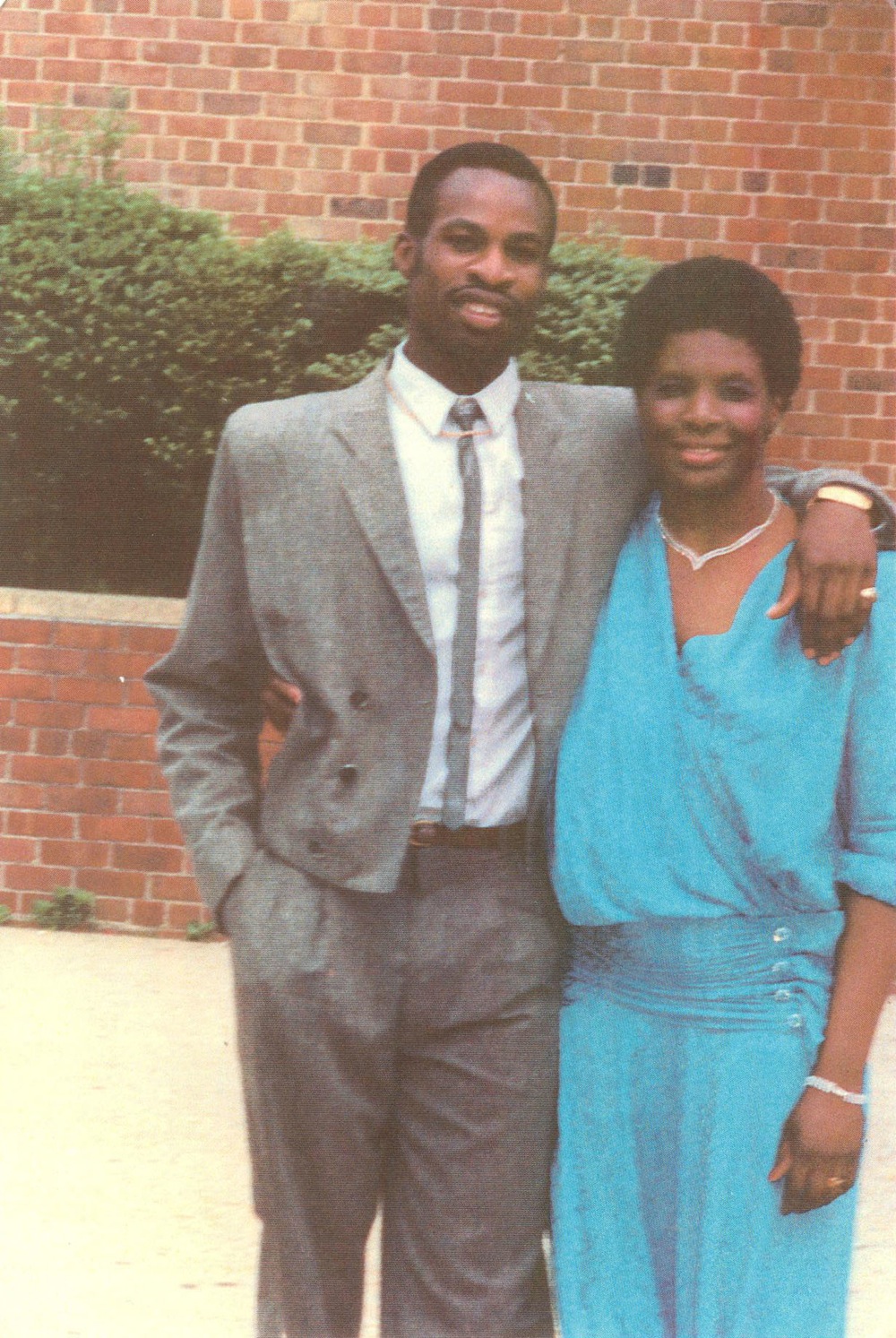 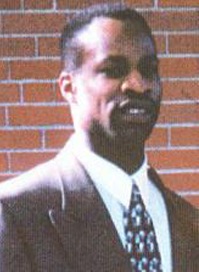 Jerome O'Neil Nedd, the first child of Miriam Nedd, was born on November 4th, 1961 in Trinidad, West Indies. He came to the United States with his sisters and brother on July 4th, 1975. Jerome attended I.S. 35, Tilden High School and later Sheepshead Bay High School, where he became a member of the track team and won several medals and trophies. While attending City College of New York (CCNY) in 1983, he held the records for the fastest time in the 400 meter race an1 the 400 yard dash. In that same year, Jerome also held the City University of New York record in the 400 meter race. After leaving CCNY Jerome pursued his passion for cooking, attending New York Restaurant School and graduating with a certificate in Culinary Arts in 1999. Upon graduation, he was appointed as a Chef at Windows of the WorId restaurant and later became Bar Chef for the Greatest Bar restaurant. It was while doing what he loved on that fatal day of September 11th, 2001 that he lost his life. Jerome was an outspoken, honest person who loved life and his family and was always giving of himself to those in need. He first met Roxanne Poole in 1978 through his sister Deborah. They lost touch and met again in 1981, when they started a friendship. They fell in love in 1986 and got married in 1988. Their union produced two bright sons, Jerome, Jr. and Jerrell. Jerome has another son, Desmond. He leaves to mourn his wife, Roxanne, sons Jerome, Desmond and Jerrell, mother Miriam, his sisters Deborah, Lisa, Carlene, and Kimberly, and his brother Marlon. Additionally, Jerome leaves a grandmother, a host of loving & aunts and uncles, brothers¬ and-sister-in-law, cousins, nieces, and nephews. The many friends who have come to know Jerome loved him dearly. We will miss Jerome greatly, though we recognize and accept that he is now safely in the arms of Jesus. May he rest in peace.